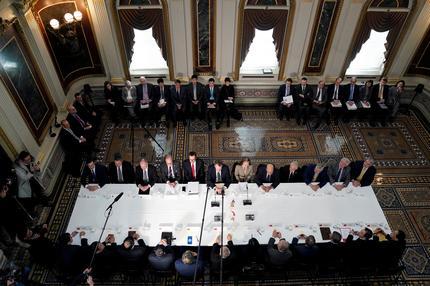 WASHINGTON/BEIJING (Reuters) – U.S. negotiators have tempered demands that China curb industrial subsidies as a condition for a trade deal after strong resistance from Beijing, according to two sources briefed on discussions, marking a retreat on a core U.S. objective for the trade talks.

The world’s two biggest economies are nine months into a trade war that has cost billions of dollars, roiled financial markets and upended supply chains.

U.S. President Donald Trump’s administration has slapped tariffs on $250 billion worth of imports of Chinese goods to press demands for an end to policies – including industrial subsidies – that Washington says hurt U.S. companies competing with Chinese firms. China responded with its own tit-for-tat tariffs on U.S. goods.

The issue of industrial subsidies is thorny because they are intertwined with the Chinese government’s industrial policy. Beijing grants subsidies and tax breaks to state-owned firms and to sectors seen as strategic for long-term development. Chinese President Xi Jinping has strengthened the state’s role in parts of the economy.

In the push to secure a deal in the next month or so, U.S. negotiators have become resigned to securing less than they would like on curbing those subsidies and are focused instead on other areas where they consider demands are more achievable, the sources said.

Those include ending forced technology transfers, improving intellectual property protection and widening access to China’s markets, the sources said. China has already given ground on those issues.

“It’s not that there won’t be some language on it, but it is not going to be very detailed or specific,” one source familiar with the talks said in reference to the subsidies issue.

A representative for the White House referred Reuters to the U.S. Trade Representative’s Office, which did not respond to a request for comment.

“If U.S. negotiators define success as changing the way China’s economy operates, that will never happen,” said the other source with knowledge of the trade talks.

“A deal that makes Xi look weak is not a worthwhile deal for Xi. Whatever deal we get, it’s going to be better than what we’ve had, and it’s not going to be sufficient for some people. But that’s politics,” that source said.

China pledged earlier this year to end market-distorting subsidies for its domestic industries but offered no details on how it would achieve that goal, three people familiar with the trade talks told Reuters in February.

One of the key sticking points in the negotiations is the removal of the $250 billion in U.S. tariffs. It is broadly expected in the trade community that U.S. negotiators want to keep some tariffs on Chinese goods, which Washington sees as retaliation for the years of damage done to its economy by Beijing’s unfair trade practices.

The role of the state firms may benefit the United States in another part of the trade deal. The Trump administration wants China to make big-ticket purchases of over a trillion dollars of U.S. goods in the next six years to reduce its trade surplus. The companies likely to make the purchases are the state-run firms, both sources said.

“The purchasing, for example, reinforces the role of the state sector because the purchasing is all being done through state enterprises,” one of the sources said.

Another point of contention between the two countries, telecommunications, may drive China to increase the state’s role rather than reduce it, the source said.

Pressure from the United States on allies to reduce cooperation with Chinese telecommunications champions such as Huawei Technologies could push the government into raising state support to develop technology at home.

Subsidies and tax breaks have been a source of friction between the two countries for years.

Washington says Beijing has failed to comply with its World Trade Organization obligations on subsidies that affect both imports and exports.

China has taken steps to address some U.S. concerns in cases brought before the WTO. It has also begun to publicly downplay its push to dominate the future of high-tech industries under its “Made in China 2025” policy, although few expect it to jettison those ambitions.

But the USTR complains of a catalog of other subsidies and supports, including preferential access to capital and land.

The United States says China has failed to disclose subsidies as required by the WTO. Washington has detailed more than 500 different subsidies it says China applies in notifications to the WTO.

The scope of China’s local government subsidy programs is largely unknown, and even the Chinese negotiators have said in recent discussions they do not know the details of all those programs.

“China continues to shield massive sub-central government subsidies from the scrutiny of WTO members,” the USTR said in a February 2019 report to Congress on China’s WTO compliance.

Reporting by Alexandra Alper and Chris Prentice in Washington and Michael Martina in Beijing; Editing by Chris Sanders and Peter Cooney