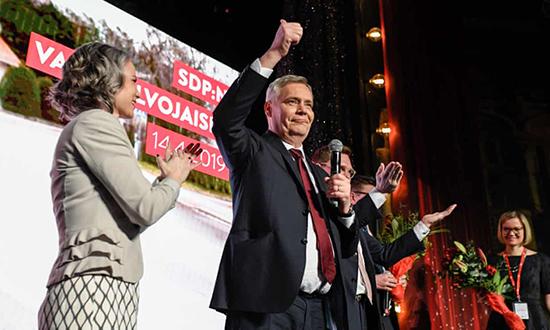 Antti Rinne on course to be country’s first leftwing prime minister since 2003, after his party leads with tight margin of just 0.2%

The leader of Finland’s centre-left Social Democratic party (SDP) has declared victory in the general election after almost complete results showed his party winning by a razor-thin margin with 17.7%.

“For the first time since 1999 we are the largest party in Finland … SDP is the prime minister party,” Antti Rinne said after more than 99.5% of votes were counted.

The nationalist, Eurosceptic Finns party was in second place with 17.5%, according to nearly complete results published by the justice ministry.

If final results confirm the outcome, Rinnecould become Finland’s first leftwing prime minister since 2003. But the process of putting together a coalition could be drawn out because of a fragmented parliament. The very close result will make negotiations to form the next coalition government particularly fraught.

Earlier results in the election, which comes amid mounting concern among voters over the future of the country’s expensive welfare system, had also given strong showings for the centre-right National Coalition party, chaired by the outgoing finance minister, Petteri Orpo, and the Centre party, of the prime minister, Juha Sipilä.

A strong showing by the Finns party will complicate coalition talks, with most party leaders ruling out any cooperation with it.

On Sunday night Rinne said he “has questions” for the Finns Party and did not rule out cooperating with them to form a majority.

“Some of the questions will be about values,” Rinne told Finnish media. “The Social Democratic Party’s values are very important, it’s the glue that will hold the government together.”

Rinne’s party could also choose to form a coalition with the conservative National Coalition party, which came in third place with 38 seats.

At stake in the election is the future shape of Finland’s welfare system, a pillar of the Nordic social model, which those on the left want to preserve through tax rises, and the centre-right wants to cut because of rising costs.

The Finns party is anti-immigration and calls for limits on environmental policies, arguing the nation – which has 5.5 million inhabitants – has gone too far in addressing issues such as climate change at its own expense.

“Finland isn’t capable of saving the world,” its leader, Jussi Halla-aho, said at one of the party’s news conferences. “We have already done our part.”

The Finns party’s stance on environmental policies, which includes an opposition to a proposed tax on meat consumption, appeals to rural voters in particular, who fear soaring fuel costs and resent any efforts to change what they see as the traditional Finnish way of life.

With the European parliament election less than two months away, the Finnish ballot is also being watched in Brussels. A strong result for the Finns party could bolster a nationalist bloc threatening to shake up EU policymaking.

The success of the Social Democrats would mark a departure for Finland and the region, where leftwing parties have struggled in recent years, yielding some of their hold on the working-class vote as nationalist parties have emerged.

The Swedish prime minister, Stefan Löfven, has clung to power after his Social Democrats suffered their worst parliamentary election result in more than a century last autumn, enlisting the support of two liberal parties with a pledge to enact some rightwing policies.

In Denmark, which holds an election in June, the Social Democrats are gaining ground, in part after espousing the populists’ anti-immigrant rhetoric.

Underscoring the growing confidence among far-right politicians in Europe, anti-immigration parties have announced plans to join forces after the 26 May EU election, in a move that could enable them to have an influence on how the continent is run.