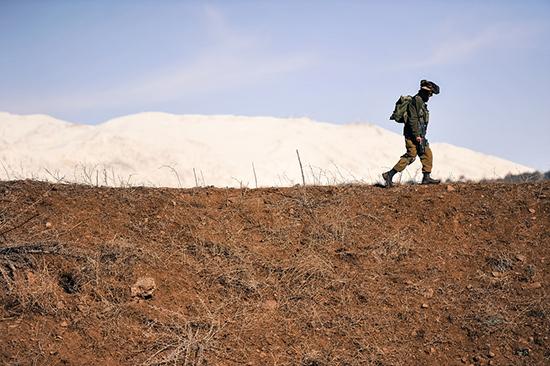 Like 18th-century Poland, Syria has been effectively partitioned by multiple nations, but unlike Poland it is too divided to ever be restored

SYRIA has been partitioned. This is the bottom line of the gruesome civil war that – after eight years, half-a-million fatalities and 10 million refuges – is finally coming to an end.

That is why the American recognition of Israel’s rule over the Golan Heights, despite its American, Russian, and Israeli aspects, is before all these a Syrian tale, a tale of hatred and darkness.

The American side of Monday’s drama is the happiest.

For Donald Trump, it fit smoothly between his defeat of the congressional attempt to derail his border-wall scheme, and his survival of Robert Mueller’s Russia-gate probe. Yet Trump’s Golan proclamation carries an American meaning that transcends his personal travails.

The plot that thickened Monday began in 2013, when Barack Obama failed to deliver on his vow to respond should Bashar Assad’s regime gas its people.

It was that display of moral weakness and strategic recklessness that led Vladimir Putin to conclude he could march into Syria unopposed and pocket with impunity America’s geopolitical estate.

That estate was the hegemony of the Middle East.

The regional domination America established in the wake of Egypt’s defection in the 1970s from Moscow’s orbit to Washington’s was lost. Russia’s swift construction of an air base in Syria in 2015, its military intervention in the civil war, and its ultimate decision of the war’s outcome – added up to Russian imperialism’s finest hour since the Soviet Union’s collapse.

Now what began with help for an old ally produced pilgrimages to the Kremlin by Turkish, Iranian, Israeli, Egyptian and Saudi leaders who collectively made that finest hour herald an era, an era of American retreat and Russian ascent.

This week that fine hour has come to its end. Russia had overplayed its hand, as it became plain that one aspect of its Syrian proxy’s fate was decided far from the Kremlin, and without it being consulted or even just informed.

Still, the price Russia paid is minimal, as no one is challenging the military and political footholds it has established in Syria. That cannot be said of the price Syria itself has paid en route to the latest episode in its unfolding partition.

POLAND WAS partitioned in several installments between 1772 and 1795 by Russia, Prussia and Austria, powerful neighbors that circled the Poles from east, west and south.

On the face of it, Syria’s predicament is similar, with Turkey slicing its north, Russia camping in its northwest, Hizballa’s Lebanese troops roaming its central west, Israel clipping its southwest, and Iranian-led Iraqis emerging from its east.

Seen this way, Syria is an unfortunate country fallen prey – like Poland in its time – to a collection of intrusive neighbors that descended unannounced on its mountains, valleys and coast.

It is a tempting analogy, not only cartographically but also morally. Poland’s conquerors subdued it for more than a century, but the Poles retained their national spirit and ultimately restored their independence. Justice became altogether poetic when the Russian czars, Hapsburg emperors and German kaisers that abused Poland vanished along with their crowns and realms.

The powers that were sucked into Syria are there first and foremost because Syria is a non-state captured by a non-nation that subjugates a non-society.

Two decades ago, as rumors trickled out about talks between Syrian leader Hafez Assad and the first Netanyahu government through the mediation of Ronald Lauder, this land-for-peace believer surprised many by opposing a territorial deal with the Syrian regime.

In Syria’s case, this column cautioned, “this attitude fails to consider Assad’s problematic relationship with his own people” (“What to do with Syria,” 3 September 1999.)

“For Western leaders,” continued Middle Israel, “ever impressed with incumbent personalities and political events, it goes without saying that for better or worse Assad speaks not only for today’s Syria, but even for tomorrow’s.”

And after cautioning that Assad and his Alawite tribe’s rule were agreeable to his citizenry no more than the shah’s rule was for the Iranians or Erich Honecker’s for the East Germans, and that unlike other Arab regimes “Assad’s is not just politically authoritarian, but also socially aloof,” we concluded:

“Any Israeli move vis-à-vis Assad must take into consideration the prospect of his regime being toppled one morning,” in which case “it would be absurd for us to give a new Syrian leadership reason to portray us as Assad’s allies.”

That the subsequent events vindicated this thinking in terms of Israel’s choices is no longer the point. The thought that the Syrian civil war would have raged atop Lake Kinneret (the Sea of Galilee) makes any sensible Israeli (including Israeli Arabs) shudder. The point is that this decade’s events exposed Syria’s political unworkability.

A society whose ruling elite is hated by the vast majority of its citizens as intensely as the Sunnis now hate the regime that has butchered, dispossessed and displaced them; and a society whose leaders bombed its citizens in their living rooms and bedrooms, and also deprived a tenth of its population (the prewar Kurds) of its right to citizenship – is not a nation. It is a divided house that cannot stand.

That is why Syria has effectively fallen apart, that is why so many are taking chunks of its land with impunity, and that is why the Syria that was founded in 1945 will not be durably restored.

Yes, the Alawite police state is back on its feet, its hoodlums are muzzling dissenters, its lawmakers are rubber-stamping the robbery of displaced Syrians, and its diplomats trot the globe spreading the news that the war is over, the bad guys lost, and the good guys are back in business.

Yes, the Syrians who dismembered Syria are back. Even so, their project can only last that long. Ask the Poles.