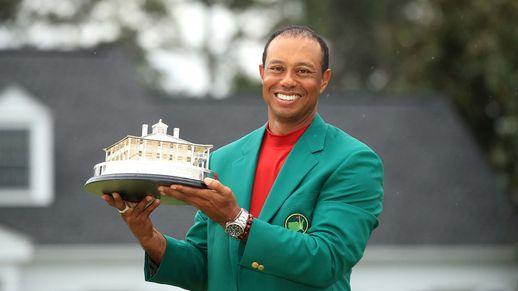 Paul Higham -Sportinglife.com
Tiger Woods rolled back the years to come out on top after a pulsating Sunday at The Masters with a powerful late run grabbing him a fifth green jacket after a one-shot victory at Augusta.

Not so long ago Woods doubted whether he would ever be able to pick up a golf club again after numerous back surgeries, let alone add to his tally of 14 majors, but it was like he never left as he signed for a final round of 70 to finish on 13-under par.

Woods finished ahead of a trio of fellow Americans on 12-under in Dustin Johnson, Xander Schauffele and Brooks Koepka, but none of them could get near the man who dominated golf for so long but who for so long looked like he’d never be able to recapture his former glory.

It’s been almost 11 years since Woods last lifted a major championship, and 14 years since his fourth victory at Augusta, but on this form he has every chance of challenging Jack Nicklaus’ record of 18 major titles.

It was classic Woods in the end though, and he even achieved a personal first for him as his 15th major win was the first time he had managed to come from behind in the final round to claim one of golf’s big four tournaments.

Francesco Molinari went into the day holding a two-shot advantage over the field, but he folded on the back nine with two double-bogeys during his round of 74 to finish on 11-under.

Credit to Augusta National for starting the round early, playing in three-balls and staging a two-tee start for the first time in their history in a bid to avoid impending thunderstorms approaching.

It was Woods who would provide the storming finish though, as he took a stranglehold of The Masters with a birdie on the 15th hole putting him in the outright lead after as many as five players had been tied at the top during the closing stages.

Woods was in no mood to relinquish that advantage and he almost bagged a hole-in-one on the par-three 16th hole, thrilling the fans with a stunning tee shot that set up a second successive birdie to take him to 14-under and into a two-shot lead.

Woods could even afford a bogey on the 18th hole and still complete victory, which sparked huge celebrations from Woods the like of which we’ve never seen before from the once winning machine – showing just what it meant after so long on the sidelines.