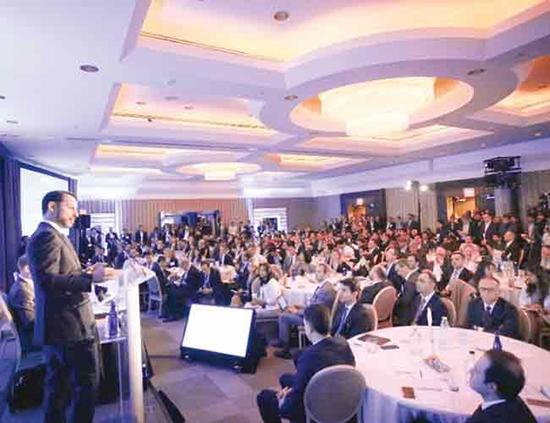 Turkish Treasury and Finance Minister Berat Albayrak held what officials from the ministry described as “very fruitful” talks with international investors and managers of large funds on the sidelines of the International Monetary Fund-World Bank spring meeting held in Washington.

Developments in the Turkish economy over the past six months were discussed at those meetings with investors who noted that they found the works carried out by the Turkish government “valuable,” according to sources from the ministry.

“The meetings were very fruitful. The main topic was the reform package [that Albayrakannounced last week]. Investors showed great interest in the package. They wanted to learn more details about the package,” the officials said.

Albayrak clearly emphasized that the government would live up to the commitments it announced with the package and some certain details with business circles, according to the sources.

The minister also held a meeting on April 11 with investors at an event organized by JP Morgan, where he made a presentation covering issues such as the targets set in the New Economic Program, the reform package, and the debt structure of Turkey.

He also responded to questions fielded by the participating investors.

At this meeting, Albayrak clearly reiterated that Turkey does not need the IMF’s support.

Officials from the ministry criticized the coverage by certain international media outlets of the investors’ meeting.

“Those reports are untrue. Their reporting does not conform to the basic principles of journalism,” they said.

The Turkish minister also held talks with European Bank for Reconstruction andDevelopment Bank (EBRD) President Suma Chakrabarti and a delegation from the development bank on the EBRD’s investments in Turkey.

On a related note, Murat Çetinkaya, the governor of the Central Bank, made a presentation at the IMF–World Bank meeting in Washington.

Çetinkaya noted that the rebalancing trend in the Turkish economy has become more noticeable and the current account balance is expected to maintain its improving outlook.

He also said that developments in domestic demand conditions and tight monetary policy stance have led to some improvement in inflation indicators.

Çetinkaya reiterated that the Central Bank will continue to use all available instruments to achieve price stability.