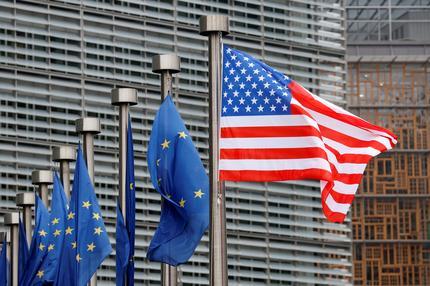 BRUSSELS (Reuters) – The European Union is ready to start talks on a trade agreement with the United States and aims to conclude a deal before year-end, European Trade Commissioner Cecilia Malmstrom said on Monday.

The EU approved two areas for negotiation, opposed by France with an abstention from Belgium. But agriculture was not included, leaving the 28-country bloc at odds with Washington, which has insisted on including farm products in the talks.

The EU vote allows the Commission to start two sets of negotiations – one to cut tariffs on industrial goods, the other to make it easier for companies to show products meet EU or U.S. standards.

Malmstrom said she would now reach out to U.S. Trade Representative Robert Lighthizer to see when talks could begin.

“We are ready as soon as they are,” Malmstrom told a news conference.

But U.S. Senator Chuck Grassley, chairman of the tax and trade-focused Senate Finance Committee, said a U.S.-EU trade deal that excluded agriculture would be “unlikely” to win approval in the U.S. Congress because so many lawmakers want farm access to Europe.

“Elimination of industrial tariffs and non-tariff barriers only get us part of the way there, especially when we face major barriers to agricultural trade in the EU,” Grassley, himself an Iowa farmer, said in a statement. “Agriculture is a significant piece of the global economy and it simply doesn’t make sense to leave it out.”

The European Commission has said it is willing to discuss cars as part of the industrial goods talks, but not agriculture.

“Agriculture will certainly not be part of these negotiations. This is a red line for Europe,” Malmstrom said.

She added Brussels would strive to agree what amounted to a limited deal before the Commission’s term ends on Oct. 31. “If we agree to start, I think it can go quite quickly.”

Malmstrom stressed that the potential tariffs deal was far less ambitious than the previous “TTIP” negotiations, which stalled after three years and have now been rendered obsolete.

The two sides are each other’s largest trading partners. Flows between the two represent 30 percent of global trade.

A Commission survey estimates an agreement on industrial tariffs would increase EU exports to the United States by 8 percent and U.S. products bound for Europe by 9 percent.

Hanging over the talks is U.S. President Donald Trump’s threat to impose tariffs on cars and auto parts of around 25 percent on national security grounds.

Trump last July agreed with European Commission President Jean-Claude Juncker not to impose tariffs on EU-produced cars and parts as long as the two sides negotiated on trade, including removal of tariffs on “non-auto industrial goods.”

But Lighthizer has voiced frustration with a “complete stalemate” with Europe on agriculture, telling a congressional committee in March there would be no U.S.-EU free trade agreement without agricultural access.

EU governments agreed the bloc would not conclude negotiations until Washington removed tariffs it has applied to EU steel and aluminum and would suspend negotiations if the Trump administration imposed new tariffs, such as on cars.

Germany, whose exports of cars and parts to the United States are more than half the EU total, has been among those most keen to press ahead with talks.