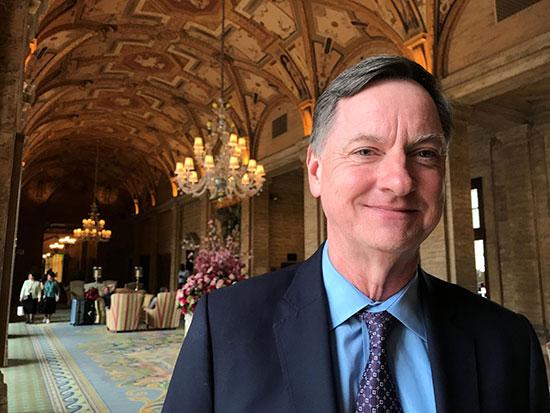 NEW YORK (Reuters) – The U.S. Federal Reserve should embrace inflation above its target half the time and consider cutting rates if prices do not rise as fast as expected, a top policymaker at the central bank said on Monday.

“While policy has been successful in achieving our maximum employment mandate, it has been less successful with regard to our inflation objective,” Federal Reserve Bank of Chicago President Charles Evans said in New York.

“To fix this problem, I think the Fed must be willing to embrace inflation modestly above 2 percent 50 percent of the time. Indeed, I would communicate comfort with core inflation rates of 2-1/2 percent, as long as there is no obvious upward momentum and the path back toward 2 percent can be well managed.”

In response to a question from Reuters, Evans said there would be an argument for cutting interest rates if inflation, excluding volatile food and energy prices, slipped to 1-1/2 percent even if growth is near its long-run trend and unemployment remains low. But he said falling inflation is not his current assumption and he feels comfortable with where rates are now.

Evans’ remarks came ahead of a broad Fed policy review this year that may result in the central bank welcoming inflation that is slightly and temporarily over its target. Some policymakers and analysts think the Fed is better equipped to respond to upward spikes in prices than to persistently low readings. That is because interest rate cuts lose their potency as borrowing costs approach zero. But any alternatives to the Fed’s current approach could be controversial.

The Fed’s current stance of patience on any further rate hikes makes sense given “heightened uncertainty,” including the outcome of U.S.-China trade negotiations, Evans said at a New York Association of Business Economists event.

“At the moment, the risks from the downside scenarios loom larger than those from the upside ones,” he said.

Evans, who as recently as January forecast three rate hikes this year, still says that “some further rate increases may be appropriate over time” if growth is close to its potential. He sees growth at around 1-3/4 to 2 percent this year, lower than his prior estimates.

But he also said policy could be loosened in other scenarios. Many investors are betting that the Fed’s next move is more likely a rate cut than a hike.

“If activity softens more than expected or if inflation and inflation expectations run too low, then policy may have to be left on hold – or perhaps even loosened – to provide the appropriate accommodation to obtain our objectives,” Evans said.

Pashinyan: Armenia to turn to CSTO or directly to Russia if hostilities expand to its entire border