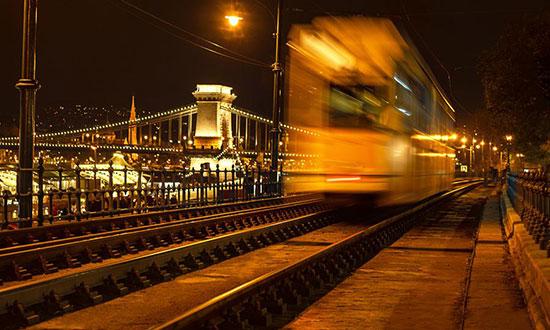 While the luxury carriages of the Orient Express once sped over rail lines running between Budapest and Belgrade, trains on this now rusting route clank along in far less high-end fashion these days.

These old rail cars also make a much more leisurely journey than the train made famous by the likes of Agatha Christie. Nowadays, eight or nine hours are required for this 350km journey between the Hungarian and Serbian capitals.

Yet, all that may be about to change, thanks in large part to a country thousands of miles away from central Europe – China.

Funded by loans from China’s Eximbank, work is now underway – at least on the Serbian side of the frontier – on upgrading the line to a high-speed rail link that will slash the travel time to just three hours.

This project is just one of the more visible aspects of Chinese involvement in the countries at each end of the line, too.

Other signs range from the Hungarian location of Huawei’s European supply and logistics HQs to Chinese management of Serbian steelworks and copper mines.

The signs are also to be seen in the vibrant Chinese Market in Budapest – home to Eastern Europe’s largest Chinese population – and in groups of hard-headed Serbian business lawyers in Belgrade, now attending classes in Mandarin.

“Every Friday, they meet up for lessons,” says James Thornley, a former senior partner with KPMG and now an independent consultant in Belgrade. “And you really know something has changed when people like that see a clear, financial advantage in doing something so difficult.”

This growing influence is not without its local critics, though – or its challenges for China.

The railway – and other projects – have raised suspicions for some of Chinese ‘debt diplomacy’, while others worry that such deals may drive a wedge within the EU, being used by Beijing and Budapest in their respective battles with Brussels.

“What started as something with a very economic rationale to it,” says Agnes Szunomar, head of the Research Group on Developmental Economics at the Hungarian Academy of Sciences, “has become something increasingly political.”

“Hungary has always had a special relationship with China,” says Dr Zoltan Vorus, Assistant Professor of International Relations at the University of Pecs and a China foreign policy expert. “Partly, it comes from a belief that Hungarians originally came from China, Eastern and Central Asia, and we are therefore brother nations.”

Whatever the anthropological truth to that, Hungary quickly became the main destination for Chinese investment in Central and Eastern Europe (CEE) following the end of the Cold War.

According to official Chinese figures, Hungary now accounts for around half of all Chinese investment in the region, with a cumulative value of some $4.3 billion.

Post-1990, Hungary also became home to around 40,000 Chinese, who were welcomed to come in back then – in contrast to the current Hungarian government’s anti-immigrant stance.

“The Chinese have always been accepted here,” says Vorus. “They have learned Hungarian and very much adapted to Hungarian society.”

At the other end of the railway, in Serbia, China is also generally seen positively.

The 2016 buy-out of the failing Smederovo steel complex by HBIS Group – China’s largest iron and steel producer – was key in this. Nowadays, Smederovo is a great success, making just under 4 million euro in annual profits.

“Because of this, China is generally seen as a nation that has done a lot of positive things in Serbia,” says Thornley. In contrast, “Investors from the EU and US tend to attach a lot of strings to their involvement, while there has been growing negativity towards traditional ally Russia, over the continued troubles of the Serbian oil company, NIS, which is majority owned by Russia’s Gazprom.”

Furthering this cooperation, in 2013, China, Hungary and Serbia agreed to build a railway between Budapest and Belgrade.

Hungary’s share of the $3-billion project was to be 85% financed by a 20-year loan from China’s Eximbank, with the rest coming from the Hungarian government.

On the Serbian side, the same Eximbank also loaned $297.6 million in November 2017 for the railway’s construction.

Since then, work on the Serbian side has begun, with the section from Belgrade to Novi Sad now reported largely complete.

Yet, on the Hungarian side, work is still to begin.

The reason why lies partly with the fact that Hungary is an EU member and Serbia is not.

“Hungary gave the project to a Chinese-Hungarian consortium,” says Vorus, “and the problem is, it was very one-sided with no competitive tendering.”

This may have broken EU rules on such infrastructure contracts, with Hungary now subject to investigation over this.

Known as an ‘infringement proceeding’, this inquiry adds to a growing number of disputes between the EU and the Hungarian government of hard-right prime minister Viktor Orban.

He has defied EU rulings on migration, democratic governance and human rights, while advocating a system of “illiberal democracy” for Europe.

At the same time, “I don’t see any economic rationale behind the railway line,” says Szunomar. “It is not an investment, but a loan, which Hungary will have to pay back, while the train won’t stop and so probably we will just be a transit country for Chinese goods going on to other markets.”

Those goods would also face problems getting to either Budapest or Belgrade. While China Ocean Shipping Company (COSCO) has been running the Greek port of Piraeus since 2008 as a Belt and Road Initiative (BRI) gateway to Europe, “We have heard no plans to upgrade the line from Piraeus to Belgrade,” says Vorus, “and currently, it takes days to do that journey, by rail or road.”

Yet Orban – and China – seem determined to press ahead with the railway.

On April 12, the Hungarian leader told the China-CEE summit in Dubrovnik that new contracts could soon be signed, with the line providing a key part of the BRI, speeding Chinese goods to European markets.

“Orban would very much like Hungary to be China’s Trojan Horse in Europe,” says Vorus. “Chinese deals, he hopes, will give him the strength to counter Brussels’ criticism.”

At the same time, China may be anxious to deliver the railway for quite different reasons.

“China wants to demonstrate a successful infrastructure project in Europe that meets EU standards and rules,” says Szunomar. “As soon as they have this railway in their portfolio, they can go on to where the real market is – Western Europe.”

If the Budapest-Belgrade train project ever finally leaves the station, then, its final destination may be far further afield.