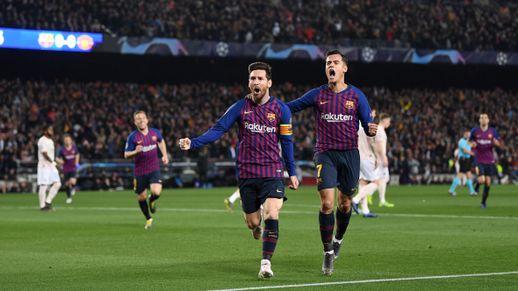 Lionel Messi delivered another reminder of his enduring star quality as Barcelona quashed Manchester United’s hopes of another improbable Champions League comeback at the Nou Camp.

United had overcome a two-goal deficit at Paris St Germain last month but Messi’s first-half brace and a wonder strike from Philippe Coutinho ushered Barcelona towards a 3-0 victory, 4-0 on aggregate, at the ground of one of the Premier League side’s greatest triumphs.

Ole Gunnar Solskjaer was insistent that the 1999 Champions League final win over Bayern Munich would have no bearing on this quarter-final second leg and his remarks proved accurate.

While his side made an energetic start, with Marcus Rashford denied by the goal frame within seconds of kick-off, Barcelona became more proactive and Messi, as he so often has done in the past, took top billing.

The 31-year-old five-time Ballon d’Or winner was largely subdued in Barcelona’s 1-0 victory at Old Trafford last Wednesday and had his nose bloodied after being caught unintentionally by Chris Smalling’s flailing arm.

But he doubled Barcelona’s advantage with a left-footed strike from the edge of the area that has so often become his hallmark, although his second strike arrived following a major blunder from United goalkeeper David De Gea.

There was nothing the United goalkeeper could do to stop Coutinho just after the hour mark, though, as Barcelona – after three last-eight exits in as many seasons – booked a semi-final showdown against either Liverpool or Porto.

For United, who were looking to reach the last four in this competition for the first time since 2011, their attentions now turn to the Premier League and a battle to finish in the top four.