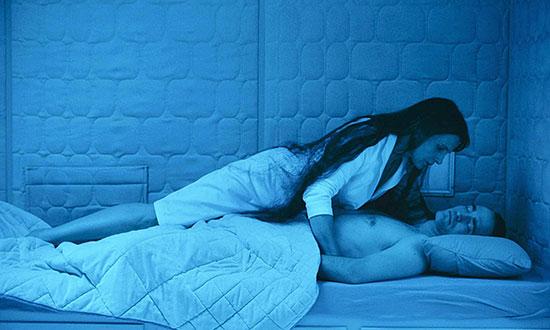 If you were installing a sex machine on a spaceship, what would you call it? James Brown? Hands solo? Beam up, Scotty? UFOhhhh?

Yet those seeking their kicks at the flicks are relatively well-served by High Life. It does, after all, contain some sex, a batsqueak to break the silence. We live in an age of cinematic abstinence, a sterile echo-chamber in which a clutch of European directors – French, especially – do their best to keep the flag flying for realistic intimacy.

So far this year, the British Board of Film Classification has awarded only two films 18 certificates, primarily on the basis of sex or nudity: High Life and the Silvio Berlusconi biopic Loro.

Last year, it was six: two French, one Swiss,one Romanian, Fifty Shades Freed and an unreleased documentary about a Los Angeles strip club. In 2017, seven films made the grade: two French, one Polish, one Finnish, one Korean, a Hungarian romance about magical abattoir workers and Fifty Shades Darker. That is a steep decline from the 14 in 2016, 15 in 2015 and 2014, and 16 in 2013.

Perhaps the BBFC has just let its hair down? Maybe it is the censor who has gone soft? Not so, says a spokesperson: “We haven’t made any significant changes to our guidelines on depictions of sex in recent years.”

If anything, the board has strengthened its petticoat. A consultation in 2018 “suggested that parents are concerned by the borrowing of visual and verbal tropes from pornography and that such material should normally be restricted to 18”. This is, of course, the most obvious reason for cinema’s new puritanism. Its traditional function as the only way to glimpse a nipple is redundant. If you want to see sex on a screen, you are no longer required to traipse to the Odeon in the rain and sit through two hours of exposition.

“Cinema’s extremeness has receded since the 70s, but that has coincided with other media infiltrating the cultural space once owned by film. I don’t think we’re any less sex-obsessed; I think we’re compartmentalising.”

Today, films need only to get bums on seats, not to cater for them once comfy. This means there is studio pressure to sanitise and so secure as low a certification as possible – particularly in the US, where most English-language films sink or swim, and where an NC-17 rating (meaning you have to be 18 or over) is a cold shower for your commercial prospects.

And while the Motion Picture Academy of America is fairly relaxed about death, gore and torture (Drag Me to Hell, The Passion of the Christ, Taken, Poltergeist, The Dark Knight and Jaws are deemed fine for unaccompanied children), it is rather more anxious about affection between consenting adults.

The wider a studio sets its sights, the harder such conservatism is enforced, particularly if your lovers share a gender. The Chinese cut of Bohemian Rhapsody excised homosexuality from the story of Freddie Mercury, as well as drugs, cross-dressing – and, more happily, Aids. Paramount is reportedly keen to redact bottoms from the upcoming Rocketman, lest they offend those unaware of Elton John’s sexual preferences.

Even Luca Guadagnino, the Italian director whose first films suggested a fond embrace of the full-frontal, was persuaded to pan to the window once the heroes of Call You By My Name finally fall into bed. Sony’s strategy worked: the film bagged a best picture Oscar nomination and a win for James Ivory’s screenplay, whose candid consummation scene never saw the light of a camera.

With carrots like that, it is small wonder film-makers are happy to sack off sex scenes. It also ensures an easier ride on set, as well as in the edit suite. Post #MeToo, bedroom scenes are shot on tiptoe, with “intimacy coordinators” mapping each moan and unit publicists on high alert. Nobody wants a final product to become a toxic watch after its stars allege exploitation.

For Hodgson, however, such eggshells are a red herring; it is empowerment that is sending old movie tropes to the skip. “The Weinstein effect can’t be overlooked. But even before Weinstein, there was certainly a reduction in sex scenes in mainstream cinema, tied to the fact we are simultaneously entering a golden age for feminism and feminist representation, while entering a socially conservative period of history.”

Our wider attitudes to pleasure have shifted, she says. “Teens and young millennials in the west are waiting longer to have sex, and having less of it when they finally do.

“So while investment in sex-tech products is burgeoning, and there’s been an explosion of young female influencers on social media talking frankly about it, anywhere where there could be moral ambiguity – like cinema – is floundering.”

Here, then, we have the phenomenon’s dirty little secret: if art imitates life, it is inevitable the movies will feign a headache. “Sex used to be more common,” says Andrew Haigh, director of Weekend and 45 Years, because “sex would sell. The audience was hungry for it.”

Now, the demographic who used to neck in the back row are home alone, messaging friends about the “sex recession”, which means they’re having miles less actual intercourse than their parents.

Film-makers are as vulnerable to this as the rest of us. Whatever the external pressures, directors’ desire to make sex a substantial part of their story appears to have waned. “It’s a shame,” says Haigh, “because something important in our lives is no longer being reflected in cinema.”

Other agendas take precedent. The explosion in identity politics means an especially buoyant strand of indie cinema is concerned instead with self-exploration; coming to terms with your own body, rather than getting to grips with someone else’s.

The decline in the kind of mid-market drama that might have featured sex has prompted a rise in genre product unsuited to such scenes. Superhero films promote saving the world with a gang of pals. There’s no space for falling in love, let alone losing the Lycra.

Horror, too, has quit the nudity and coitus interruptus for which it was once relied upon. Jordan Peele’s Us is a bloody, frightening and completely chaste parable about America’s attitude to the homeless. It is also the highest-grossing original movie of the year so far.

Even films that begin their run on the small screen, never insulated from competition with the harder-core offerings in your own home, seem no keener to get their kit off. Netflix’s output is a mix of squeaky-clean teen romance and awards bait such as Roma and The Ballad of Buster Scruggs, in which any sex is brief, discreet and generally precedes substantial tragedy.

Everyone appears to agree: the zipless flick is the new ideal. Hodgson points to the success of La La Land, that sizzling romance in which no one takes their top off: “We want attraction, tension, but none of the messy business of trying to ascertain whether a seduction was ethical or not.”

Everyone, it seems, save for two groups. “The big but in all this,” says Juzwiak, “is world cinema, particularly European cinema, which hasn’t shied away from sex and, in fact, has often found ways of using sex to tell a story.

“Movies like The Duke of Burgundy or Sauvage or BPM gracefully integrate eroticism into the narrative – even when the sex itself is far from graceful. Even the American films that have focused on sex tend to do it with a leer and luridness, regarding sex with a certain narrative fetishism, as opposed to matter-of-factly.”

Looser attitudes to sex in Europe are not news. What is curious is that all the films Juzwiak mentions are gay stories (adult dramas, that is, not pussyfooting big-budget singalongs). The annals of heterosexual screen sex overflow with footage more risible than arousing. But gay cinema is unsaddled by this tittering history, so has more licence for frankness.

And, most peculiarly, it is us prim Brits leading the charge. Andrew Haigh broke the mould with 2011’s brilliant – and incredibly explicit – Weekend. Francis Lee picked up the baton six years later with “Yorkshire Brokeback” God’s Own Country. Lee’s new film, Ammonite, in which Saoirse Ronan’s Scottish geologist gets her rocks off with Kate Winslet’s famous palaeontologist, looks likely to plough the furrow yet further.

For gay people, then, there is light at the end of the aisle. For everyone else, it’s back to the black hole for a grim fling in the Fuckbox.

High Life is released in the UK on 10 May