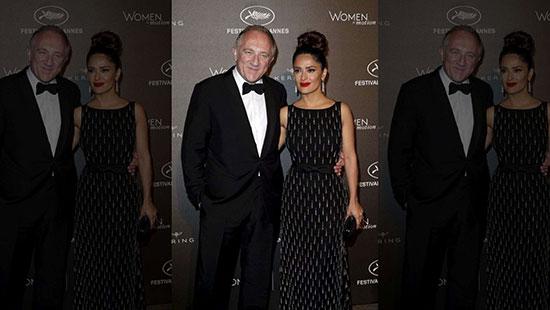 Some of France’s richest families have promised to help restore the Notre Dame Cathedral after a devastating fire destroyed much of the historic Paris landmark.

French businessman Francois-Henri Pinault said Monday night he and his family (including his wife, actress Salma Hayek) will donate €100 million (US$113mn) to the cathedral’s reconstruction.

“This tragedy strikes all the French and beyond all those who are attached to the spiritual values,” he tweeted. “Faced with such a tragedy, everyone wishes to give life back to this jewel of our heritage.”

Pinault is chair and CEO of the international luxury group Kering, which includes Gucci and Saint Laurent. He is also president of holding company Groupe Artemis, which owns the fine arts auction house Christie’s.

“My father [François Pinault] and I have decided to release as of now from the funds of Artemis a sum of 100 million euros to participate in the effort that will be necessary for the complete reconstruction of Notre Dame,” he said.

Pinault’s donation was doubled on Tuesday morning by Bernard Arnault, owner of luxury goods group LVMH, whose brands include Moët & Chandon and Dior.

“In the wake of this national tragedy, the Arnault family and the LVMH Group pledge their support for #NotreDame. They will donate a total of 200 million euros to the fund for reconstruction of this architectural work, which is an integral part of the history of France,” a statement posted on the LVMH Twitter account read.

Valerie Pecresse, the leader of France’s Ile-de-France region, said the region would release €10 million of “emergency aid to help the archbishop to make the first work” of reconstruction.

The French Heritage Society, an American non-profit dedicated to the “preservation, restoration and promotion” of French heritage in the US and France, has also launched a fund for Notre Dame’s restoration. Its executive director, Jennifer Herlein, told Reuters that “Notre Dame is obviously an architectural marvel and most certainly a monument that should be restored.”

A jewel of medieval Gothic architecture, the Notre Dame Cathedral is one of the world’s best-known and most visited monuments.

It took more than 400 firefighters to tackle the blaze, which is believed to have started in the scaffolding, erected to perform repairs in the cathedral. The exact cause of the fire is under investigation.

Despite the extensive damage, the walls of Notre Dame, as well as many of the priceless religious relics inside, remain intact. Two police officers and one firefighter were injured while tackling the fire.