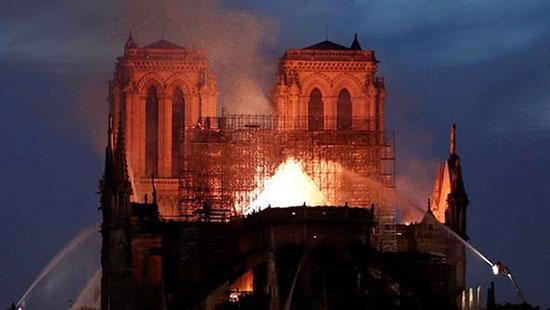 One thing that jumped out at me, as I watched Notre Dame burn in real time on BBC and Sky News, was the statement of some reporter or commentator or architectural expert that the cathedral could and would be rebuilt, although perhaps the new structure would be “more modern” than the old one. Later that evening, in his speech to the nation, President Macron vowed: “We will make the Cathedral of Notre Dame even more beautiful.”

In November, Sir Roger Scruton was named to a government commission in Britain that, after at least a half century of ugly architecture, is tasked with ensuring that new public housing will be beautiful. Throughout his long and varied career, Sir Roger has had a lot to say about beauty. He has spoken wisely about the connection among the good, the true, and the beautiful, and has strongly opposed those who place beauty on a lower level of importance than goodness and truth. He is one of a relatively small and brave band of cultural critics who have linked the contemporary decline of beauty as a criterion, not just in architecture but also in art, music, and literature, and the accompanying ascent of what can only be called a cult of ugliness, to a broader rise in social and cultural decadence throughout the Western world. Emblematic of that cult of ugliness are such buildings as La Défense and the Pompidou Center. As one after another of these hideous creations went up in recent decades, blighting the skyline of the City of Light, the eight-centuries-old Cathedral of Notre Dame, in the very heart of the French capital, stood as an enduring rebuke to them and everything they represented.

On April 10, an interview with Sir Roger Scruton was posted on the website of the New Statesman. Several of his remarks were instantly dubbed controversial. Among them was a statement to the effect that Europe has been invaded by tribes of Muslims from the Middle East.” True. In addition, Sir Roger said that the word Islamophobia had been “invented by the Muslim Brotherhood in order to stop discussion of a major issue.” Also true. But if you want to be a mainstream public figure in western Europe these days, you’re not allowed to say such things. Almost immediately, Sir Roger was kicked off the beauty commission. Their loss.

Among the consequences of the Islamic invasion of Europe has been the widespread vandalism of churches. Coincidentally, only the day before the Notre Dame fire, Raymond Ibrahim noted at the Gatestone Institute website that in 2018 there had been 1,063 reported acts of damage to Christian churches, statues, etc., in France, and that while it’s an open secret that the overwhelming number of perpetrators are Muslims, the local authorities and news media routinely obscure this fact, while the national and international media almost entirely stay mum on these incidents. As Notre Dame went up in smoke, it was only natural to wonder if adherents of the Religion of Peace had decided to go for the big time and commemorate the start of Holy Week by taking down France’s most iconic church. Even after the government declared that the fire had not been caused by terrorists, that same government’s readiness to conceal the jihadist motives of hundreds of church desecrations made it understandable that some. people continued to wonder. Even during the fire, Fox News reporter Shepard Smith cut off interviewee Philippe Karsenty –  famous for his valiant exposure of the French media’s use of staged videos to “document” claims of IDF atrocities – when he dared to mention France’s current rash of jihadist church attacks and to suggest that the Notre Dame fire just might fall into the same category.

While some European churches are being vandalized in the name of Islam, others are being turned into mosques. Three days before the Notre Dame fire, Hege Storhaug reported that a historic mission house in Fredrikstad, Norway, had been snapped up by a Muslim congregation, a transaction that the local bishop and mayor both considered peachy keen. Then, on the very day of the Notre Dame fire, Storhaug reported that a Pentecostalist church in Egersund that had recently been converted into a mosque had gone up in flames twice during the course of a few hours. As of yet, no suspects have been identified.

One thing was clear about the fire at Notre Dame. Even if Muslims hadn’t set it, many cheered it. Donald Trump was mocked during the 2016 presidential campaign when he said that New York-area Muslims had cheered the Twin Towers’ collapse. But there was no Facebook in 2001. On April 15, as the skies over Paris filled with smoke, the Facebook pages for Al Jazeera and France 24, among others, were awash in gleeful reactions to the conflagration, written in English, French, and Arabic by people with Arabic-sounding names, many of whom used thumbs-up, smiley-face, and laughter emojis. When some counterjihadist sites dared to report on these celebratory responses, sites like Buzzfeed pushed back, denying that any Muslims had applauded the fire when in fact it was evident that thousands and thousands, at the very least, had done so.

Not so very long ago, Paris was widely considered the heart of Western civilization and culture. And at its heart was the Cathedral of Notre Dame. In recent decades, as the number of Muslims in greater Paris has risen into the millions, and the city has gained notoriety for its no-go zones and car burnings, that sometime capital of Western civilization has instead become, for many, a symbol of Western civilization’s decline. So it is that when one hears talk of a the construction of new Notre Dame that will be “more modern” or “more beautiful” than the original, it’s only natural – especially given that the cathedral, like all such structures in France, belongs not to the Catholic Church but to the French state –  to picture a building that, in the eyes of national and municipal officials, their interfaith advisors, and whatever cockamamie commission of postmodernism-loving architectural experts they end up putting together, ends up being some multipurpose multicultural monstrosity centered on a non-denominational worship area and/or containing different spaces for different faiths, with plenty of prayer rugs, wudu units, etc., for Muslims.

After all, in today’s Paris, Muslims already make up the majority of people who go to a house of worship at least once a week, n’est-ce pas? And given the way that these things work in most of Western Europe nowadays, it seems a foregone conclusion – barring some powerful, persuasive, and unprecedented movement to the contrary – that the voices that prevail as this project goes forward will be those arguing that the new Notre Dame must be a Notre Dame (although of course something needs to be done about that name) for the twenty-first century, for an increasingly non-Christian Paris, for an era of fundamental transformation in regard to matters spiritual. Why, after all, resurrect a cathedral that was already mainly a museum, a tourist mecca, a reminder of dead glories, when you can replace it with a spectacular mosque that will be a living place of worship for armies of believers, and will thereby serve as a dynamic, forward-looking symbol of the Paris, the France, the Europe of the twenty-first century and beyond, and hence affirm Paris’s place as the heart of a dramatically transformed Europe and – Allah willing – usher in a new Belle Époque?

I hope I’m wrong in imagining such a future for that sad, scorched plot on the Île de la Cité. But I wouldn’t bet against it.

Bruce Bawer is the author of “While Europe Slept,” “Surrender,” “The Victims’ Revolution,” and “The Alhambra.” “Islam,” a collection of his essays on Islam, has just been published.