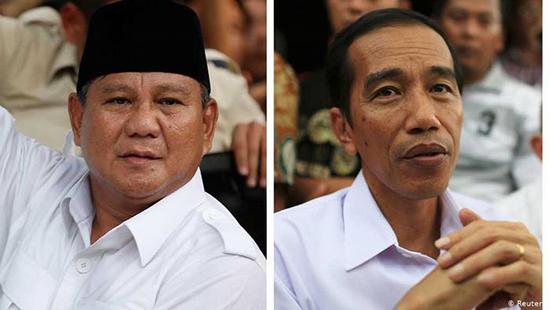 More than 190 million Indonesian voters have been to the polls for an election that will test the country’s democracy. The two presidential candidates have similar ideas, but very different leadership styles.

The Indonesian election has been a massive undertaking, with presidential, parliamentary, regional and local elections all taking place at the same time in a country with 193 million eligible voters spread across three time zones; from Papua in the east, to the tip of Sumatra over 5,000 kilometers (3,000 miles) away in the west.

According to estimates by the Australia-based think tank Lowy Institute, these five simultaneous elections will combine more than 245,000 candidates, contesting a total of 20,000 seats in local, regional and national legislatures. This will involve nearly 6,000,000 election workers and 810,000 polling stations. Lowy dubbed it the “world’s most complicated election.”

The all-important presidential vote is a remake of the 2014 contest, with incumbent Joko Widodo, popularly known as Jokowi, once again going up against former general Prabowo Subianto.

Jokowi won the 2014 election with 53% of the votes, and ran his campaign by promoting Indonesia’s social plurality, while promising to boost the economy and improve infrastructure.

This time around, Subianto hopes to edge off Jokowi by running on a platform of law and order, combined with conservative Islamic values. Subianto is selling himself as a strongman, and has said he wants to transform Indonesia into an “Asian tiger.”

Whether this strategy will work with Indonesian voters is uncertain. Current opinion polls currently show Jokowi with a comfortable lead. Outside of conservative circles, Subianto is seen by many voters as a firebrand. And as the son-in-law of Indonesia’s former dictator, Suharto, for some voters, he represents a return to Indonesia’s authoritarian past.

Jokowi is known for his moderate and measured communication style and has built a strong voter base backed up by infrastructure projects along with health and education programs that have benefited rural communities in this far-flung archipelago nation.

As his first term comes to an end, he has boosted Indonesia’s economy to 5% annual growth and increased the country’s GDP to over $1 trillion in 2017.

However, during his five years in office, many civil society and human rights organizations have criticized Jokowi for curtailing certain civil liberties and cozying up to army officials and Muslim clerics.

The Australia-based publication Inside Indonesia recently described the 2019 election as a vote for the “lesser evil.” And despite the candidates’ contrasting leadership styles and background, their policy platforms are only marginally different. Subianto also promises to invest heavily in infrastructure.

Both Jokowi and Subianto have selected running mates that can help the candidates reach the other side of the ideological spectrum in Indonesia. Jokowi’s running mate, Ma’ruf Amin, is a Muslim cleric who chairs the Indonesian Ulema Council, the country’s largest clerical council.

Subianto’s running mate, Sandiaga Uno, is an investor and businessman, who resonates with Indonesia’s emerging Muslim middle class. As the former deputy mayor of Jakarta, with Uno on the ballot, ex general Subianto hopes to reach more urban voters.

Indonesia is the world’s largest Muslim-majority country, and although it is a secular state with a separation of religion and state, political parties often employ religion in their campaign tactics. Subianto has used Jokowi’s secular stance to attack the president’s adherence to Islamic principles.

“Religious regulations are used as political tools, especially in local areas, to strengthen support among an incumbent leader’s constituency prior to an election,” Ray Rangkuti, from the Indonesian politics watchdog Lingkar Madani, told DW.

On the provincial level, experts have also seen a connection between the strengthened role of politicians elected directly since 2005 and an increase in regulations based on Shariah law.

Following decades of authoritarian rule, Indonesia embraced democracy in 1998 and adopted a national philosophy of equality and national unity called Pancasila, which is enshrined in the country’s constitution.

“Parliamentary votes are rare and essentially reflect a failure to secure a consensus,” Kevin Evans from the Australia Indonesia Centre, told DW.

However, the parliament is decisive in creating the field for presidential elections.

Sixteen parties are competing in the 2019 parliamentary elections, but Indonesian voters are also somewhat forced into voting for establishment parties.

Newcomers, and their parties, face considerable hurdles. To send new legislators to parliament, a party must garner 4.5% of nationwide votes, up from 2.5% set in 2009. Newly founded parties, such as the social democratic and secular PSI therefore have little chance to generate the political momentum, and publicity, needed to put their legislators in power.

Once in parliament, parties that want to put a candidate on the ballot must have at least 20% support in the current parliament, or alternatively have won at least 25% of the vote in the latest election.

In order to contest elections, coalitions form around a party and its candidate. Jokowi’s Indonesian Democratic Party of Struggle (PDI-P) won 19% of the vote in 2014, the largest party in parliament, but still under the threshold to field a candidate without a coalition.

This narrows down the competition to the benefit of incumbents, larger parties and their supporters. Although this can help ensure stability, it could also pose a risk to the future of political polarity in Indonesia’s 20-year-old democracy.