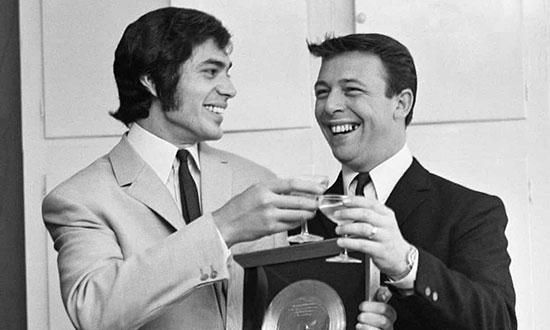 The Woking-born songwriter wrote Tom Jones hits Delilah and It’s Not Unusual, as well as Leeds United anthem Marching on Together

Released in 1964, It’s Not Unusual was Tom Jones’s debut single, and his first No 1 hit, also featuring Reed as arranger and pianist. The pair reprised their success with Delilah in 1968, which reached the Top 10.

Jones paid tribute to Reed on Twitter, describing him as a “gifted songwriter who was instrumental in penning many a hit, incl two important songs for me … Les was a lovely man, whose legacy will live through his music.”

In 1959, Reed joined the John Barry Seven as a pianist, and developed his career as a songwriter in the 1960s, writing hits for artists including Lulu, Herman’s Hermits and the Dave Clark Five.

Reed also co-wrote the 1972 song Marching on Together, better known as the anthem of Leeds United FC. The track peaked at No 10. It was released again in 1992, reaching the Top 50, despite only being available in Yorkshire record stores and in the LUFC shop.

Sir Tim Rice tweeted: “He was [the] composer of countless hits that will live on for years, decades, to come. All his music biz chums will miss him enormously & will never forget his songs, talent & generosity of spirit.” Spandau Ballet star Gary Kemp said that “a master of British songwriting has left us”. Mike Batt called Reed his “role model”, and Connie Francis said: “Les gave new meaning to the word ‘gentleman’.”

In a statement, his family said: “We are all so immensely proud of everything Les achieved in his incredible lifetime. We know that his name will be remembered for what he did for music and that he will always live through his songs and compositions for the rest of time.”

Reed was born in Woking, Surrey, in 1935. He is survived by his daughter, Donna, and grandsons, the BBC reports.