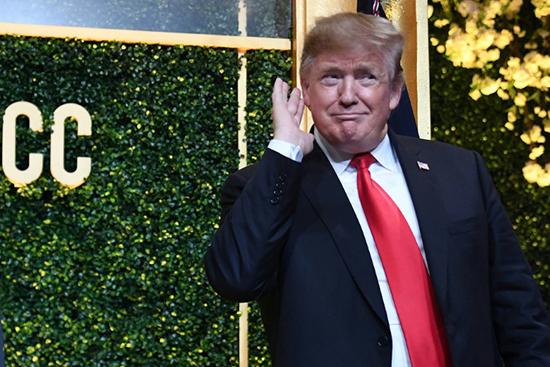 President Donald Trump responded cautiously to North Korean leader Kim Jong-un’s demand for the U.S. to change its attitude by the end of the year in order to hold a third summit.

Trump said denuclearization talks between Washington and Pyongyang were moving along “just perfectly” after the breakdown of their summit in Hanoi in February.

“I don’t want it to move fast,” Trump was quoted as saying during a roundtable on the economy and tax reform in Burnsville, Minnesota. “It doesn’t have to move fast. Right now it’s moving along just perfectly and we have a good relationship.”

His remarks came after Kim said a third summit with Trump would be possible but only if the U.S. makes a courageous decision regarding nuclear negotiations by the year’s end during a session of the 14th Supreme People’s Assembly held last week. This was taken to mean that the North would not accept the current U.S.’s “big deal” proposal in which sanctions would only be lifted when Pyongyang hands over all of its nuclear weapons to Washington.

Trump and Kim failed to reach any deal at their February summit as they failed to narrow their gap on the correlation between denuclearization steps and sanctions easing.

However, Trump opened the door for a future summit by saying “He (Kim) just said the other day he looks forward to more talks. Talk is okay.”

Experts said that Trump is setting up a tug-of-war in negotiations with the North as this benefits his domestic political agenda.

“At this moment, having no deal is politically advantageous for Trump. He is not trying to end the situation, but to control the North. He could find a compromise with the North later, but he needs to take strong action on the matter now to impress his domestic audience,” Kim Joon-hyung, a politics professor at Handong Global University told The Korea Times. He said it was a negotiation tactic and the conflict situation will last for some time.

“There is no need for Trump to show more flexibility in talks as his hawkish approach helps him gain popularity in the U.S.,” Hong Hyun-ik, a chief researcher at the Sejong Institute told The Korea Times. “The U.S will wait for the results of an inter-Korean summit before advancing for talks”

Meanwhile, citing Kim’s remarks, U.S. Secretary of State Mike Pompeo expressed the hope of lifting sanctions imposed on the North, but pressured Pyongyang to respond to Washington’s demand for it to eliminate its nuclear weapons program as early as possible.

“I would love nothing more than to lift sanctions on North Korea. I truly would, because it would mean we were successful. It would mean that North Korea no longer had a nuclear weapons program or a weapons of mass destruction program,” Pompeo was quoted as saying during an event at Texas A&M University, Tuesday. “He said he wanted it done by the end of the year. I’d love to see that done sooner.”

“I saw his statement. I appreciate that. There are lots of conversations taking place. I saw Chairman Kim’s statement. President Trump is determined to move forward diplomatically, right now.”