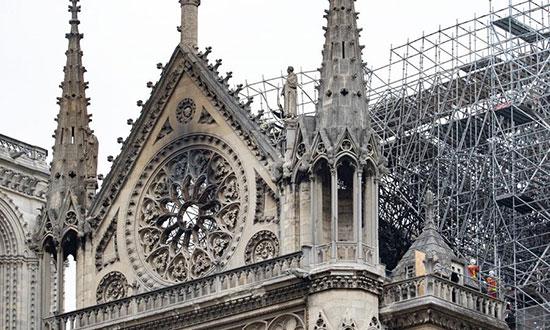 Tragic blaze at iconic Paris cathedral destroyed roof and steeple, and artifacts and paintings have been lost

French investigators probing the tragic fire at Notre-Dame Cathedral Tuesday questioned workers who were renovating the monument while hundreds of millions of euros were pledged to restore the 850-year-old masterpiece.

As firefighters put out the last smoldering embers, numerous French billionaires and companies stepped forward with offers of cash donations amounting to around 700 million euros ($790 million) to remake the landmark.

Most of the roof has been destroyed, its steeple has collapsed and an unknown number of artifacts and paintings have been lost. The main organ, which had close to 8,000 pipes, has also suffered damage.

But the cathedral’s walls, bell towers and the most famous circular stained-glass windows at France’s most visited tourist attraction remain intact, leading the vicar general Philippe Marsset to call it “more than miraculous.”

“We’re all just dumbfounded. It’s more than miraculous, it’s heroic,” Marsset said, who paid tribute to the more than 400 firefighters who toiled through the night.

Junior Interior Minister Laurent Nunez told reporters at the scene that work to secure the structure would continue into Thursday, allowing firefighters access to remove remaining artifacts and artworks.

Though “some weaknesses” in the 850-year-old structure had been identified, overall it is “holding up OK”, he added.

The Paris fire service said that the last remnants of the blaze were extinguished Tuesday, 15 hours after the fire broke out.

Renovation work on the steeple, where workers were replacing its lead covering, is widely suspected to have caused the inferno after the blaze broke out in an area under scaffolding.

“Nothing indicates this was a deliberate act,” Heitz told reporters, adding that 50 investigators had been assigned to what he expected to be a “long and complex” case.

The architect in charge of the renovation project slated to last until 2022 said no workers were on the site when flames first appeared shortly before 7 pm on Monday.

‘Epicentre of our life’

French President Emmanuel Macron struck a defiant tone late Monday as he visited the scene with his wife Brigitte, telling reporters: “We will rebuild Notre-Dame because it is what the French expect.”

He described the cathedral as the “epicentre of our life.”

A public appeal for funds drew immediate support from French billionaires and other private donors as well as from countries including Germany, Italy and Russia, which offered expertise.

Support came from outside France as well, with Apple chief Tim Cook announcing the tech giant would give an unspecified amount to help restore a “precious heritage for future generations.”

Specialized craftsmen and rare materials are expected to be needed to restore Notre-Dame, which is seen as an emblem of France and, more broadly, a symbol of Western civilization that has survived revolutions and war.

“We have everything to be able to rebuild it in exactly the same way,” Culture Minister Franck Riester told France Inter, adding that the government was looking at ways to encourage donations.

But experts warned a full restoration will take many years. “I’d say decades,” said Eric Fischer, head of the foundation in charge of restoring the 1,000-year-old Strasbourg cathedral.

Thousands of Parisians and tourists watched in horror Monday as flames engulfed the building and rescuers tried to save as much as they could of the cathedral’s treasures.

Many more came Tuesday to the banks of the river Seine to gaze at where the roof and steeple once stood.

A firefighter suffered injuries during the blaze, which at one point threatened to bring down one of the two monumental towers on the western facade of the cathedral that is visited by 13 million tourists each year.

The Holy Crown of Thorns, believed to have been worn by Jesus at his crucifixion, was saved by firefighters, as was a sacred tunic worn by 13th-century French king Louis IX.

Rescuers formed a human chain at the site of the disaster to evacuate as many artifacts as possible, which were then stocked temporarily at the Paris town hall.

Smoke-damaged paintings will be sent to the Louvre museum, a worldcentere for restoration.

Shock at the extent of the damage was palpable in France and stirred reactions from governments worldwide.

In a rare statement, Britain’s Queen Elizabeth II said she was “deeply saddened,” while Pope Francis hoped that Notre-Dame “may once again become, thanks to reconstruction work and the mobilization of all, a jewel in the heart of the city.”

The cathedral has been a backdrop to the twists and turns of French history since construction began inthe mid-12th century – and has featured in countless books and movies.

Bells at cathedrals across France were to ring out on Wednesday at 6:50 pm in tribute.

Meanwhile, French fire chiefs on Tuesday dismissed comments by Donald Trump on how to tackle the fire, with one describing the US president’s advice as “risible.”

As the fire raged on the roof of the iconic Paris landmark Monday, Trump tweeted that “perhaps flying water tankers could be used to put it out. Must act quickly!”

But doing that would have brought the ancient cathedral crashing down, the fire chiefs said, in comments backed up by experts in Britain.

“Everything would have collapsed,” said Lieutenant-Colonel Michael Bernier, a fire chief who speaks for France’s civil defence organisation and who described the suggestion as “risible.”

Releasing even one load from a Canadair water bomber used to fight forest fires on Notre-Dame would be “the equivalent of dropping three tonnes of concrete at 250 kilometres per hour” on the ancient monument.

– with reporting by AFP