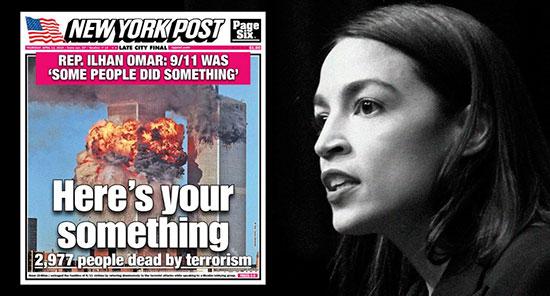 In a Sunday interview with the Yahoo News podcast “Skullduggery,” the freshman New York congresswoman explained why she is endorsing a boycott of the paper organized by local Yemeni-American bodega owners, calling the Post’s attack on her friend Rep. Ilhan Omar “beyond the pale.”

Ever since she was elected last November, the Post has relentlessly attacked Ocasio-Cortez over her progressive views and her opposition to Amazon’s plan to move its headquarters to Queens. The congresswoman dismissed the paper as a “toy” of media mogul Rupert Murdoch (whose News Corp. owns the paper as well as Fox News.)

But she said the paper’s coverage of her is not the reason she tweeted an endorsement of the Post boycott over the weekend.

“It can be annoying or agitating, but I didn’t call for this when they were going after me,” Ocasio-Cortez said about the Post’s coverage of her record in Congress.

Rather, she says she was motivated by the paper’s front page cover last week highlighting Omar’s controversial reference to the Sept. 11 terror attack as a case of “somebody did something.”

“‘Here’s your something,’” screamed the Post’s front page cover over a photograph of the Twin Towers in flames on 9/11.

That “was just beyond the pale, you know?” Ocasio-Cortez said on “Skullduggery.” “There’s aggressive politics. There’s people that won’t be fair to you and things like that, and I understand that that’s part of the field that comes with it. But, you know, I think that this is unacceptable.”

“And also I think it is important to, to assert that I didn’t call for a boycott of the New York Post,” she said. “What I’m, I’m amplifying, I’m amplifying organizing that’s happening on the ground, and I, I do think that there’s a substantive difference between the two.”

On Sunday, Ocasio-Cortez tweeted about the boycott.

Her tweet then linked the call to boycott the Post made by Dr. Debbie Almontaser, a community activist and former principal of the Brooklyn public high school Khalil Gibran Academy.

Asked on Skullduggery if that tweet wasn’t “implicitly” endorsing the Post boycott, Ocasio-Cortez responded: “I endorse it. I do endorse it.”

Pressed on whether her goal was to force a change in the paper’s editorial policies or to simply hurt its bottom line, Ocasio-Cortez said her gesture was more of a show of support for those who were organizing the boycott.

“Well for me, my perspective is, my focus is actually less in endorsing it, my focus is less on the Post and [more on] the many bodega owners and building the power and solidarity of immigrant groups in New York City,” she said. “Like that to me is what was exciting and inspiring about this action. Because these are the same folks who shut down almost every bodega in New York City in protest of the Muslim ban. And what that does is that it elevates the consciousness of all New Yorkers.”