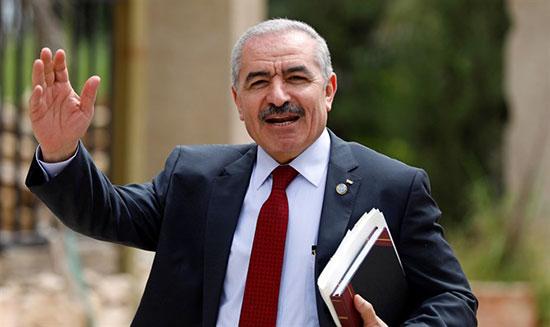 Mohammad Shtayyeh: Trump has no partners, everyone will reject his peace plan.

The new Palestinian Authority (PA) cabinet leader, Mohammad Shtayyeh, on Tuesday accused the United States of declaring financial war on his people and said the US administration’s peace plan will be “born dead”.

Speaking to The Associated Press, Shtayyeh predicted that the international community, including US allies in the Arab world, would join the Palestinian Arabs in rejecting President Donald Trump’s expected peace plan.

Shtayyeh also discussed the PA’s financial difficulties in the wake of Israel’s decision to offset the PA’s payments to terrorists from the tax funds it collects on its behalf, as well as the Trump administration’s cuts in aid to the PA.

“Israel is part of the financial war that has been declared upon us by the United States. The whole system is to try to push us to surrender” and agree to an unacceptable peace proposal, Shtayyeh charged. “This a financial blackmail, which we reject.”

The PA cabinet leader laid out a number of proposals for weathering the storm, saying he has imposed spending cuts by reducing perks for his Cabinet ministers.

He said he would seek to develop the Palestinian agricultural, economic and education sectors and seek ways to reduce the Palestinian economy’s dependence on Israel. For example, he proposed importing fuel from neighboring Jordan, instead of from Israel, and even floating a Palestinian currency. He also said the Palestinians would seek financial backing from Arab and European donors.

Shtayyeh stated that after all of the US moves in favor of Israel, particularly the recognition of Jerusalem is Israel’s capital, there is nothing left to negotiate.

He stressed that any proposal that ignores key Palestinian demands will be rejected by the international community.

“Where are we going to have the Palestinian state?” he asked. “We are not looking for an entity. We are looking for a sovereign state.”

A source familiar with the Trump peace plan told The Washington Post on Sunday that it will include practical improvements in the lives of Palestinian Arabs but is likely to stop short of ensuring a separate, fully sovereign Palestinian state.

Aides to Trump said last week they expect the president to release his peace plan once Prime Minister Binyamin Netanyahu forms a coalition in the wake of his election victory. These officials added that despite criticism of the administration’s moves to date, the plan will demand compromises from both sides.

The PA, which has been boycotting the US ever since Trump’s recognition of Jerusalem as Israel’s capital in December of 2017, has rejected the US peace plan before it has even been unveiled.