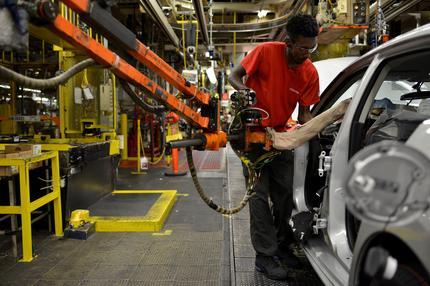 The weakness in manufacturing reported by the Federal Reserve on Tuesday is in tandem with a moderation in the broader economy, and is despite the White House’s “America First” policies, including trade tariffs aimed at protecting domestic factories from what Trump says in unfair foreign competition.

“Manufacturing production has pivoted to the downside in the first quarter of the year, showing the revival in factories and output is sputtering for the first time since the Trump economics team took office,” said Chris Rupkey, chief economist at MUFG in New York. “The trade war and America First policies have not brought factories back home yet.”

Production at factories dropped at a 1.1 percent annualized rate in the first quarter. That was the first quarterly drop since the third quarter of 2017 and followed a 1.7 percent pace of increase in the October-December period.

U.S. financial markets were little moved by the data.

Motor vehicles and parts production dropped 2.5 percent in March after increasing 2.3 percent in February. An inventory overhang in the automobile sector is weighing on production.

Factory employment declined in March for the first time since July 2017. Excluding motor vehicles and parts, manufacturing output rose 0.2 percent in March, lifted by increases in the production of primary metals, and computer and electronic products, after falling 0.5 percent in February.

While that offered some glimmers of hope for manufacturing, the outlook for the sector, which accounts for about 12 percent of the economy, is cloudy. A survey from the New York Fed on Monday showed a measure of future business activity in New York state dropped to a more than three-year low in April, with companies downbeat about new orders and shipments.

“We think we could be moving past the worst of the recent soft patch for the manufacturing sector, although the evidence of this improvement has not been overwhelmingly clear,” said Daniel Silver, an economist at JPMorgan in New York.

Manufacturing is also being hobbled by last year’s surge in the dollar and softening global economic growth, which are hurting exports. The sector could be further strained by Boeing’s decision to stop deliveries and cut back production of its troubled 737 MAX aircraft. The MAX planes have been grounded indefinitely following two deadly crashes.

“The delivery stoppage and production slowdown of the 737 MAX will be a drag on production and orders data in the near term, and may subtract as much as two tenths of a percentage point from second-quarter GDP growth,” said Tim Quinlan, a senior economist at Wells Fargo Securities in Charlotte.

While manufacturing is struggling, there are signs of green shoots in the housing market after activity contracted last year. A survey from the National Association of Home Builders on Tuesday showed confidence among single-family homebuilders edged up this month amid optimism over sales conditions and buyer traffic.

The housing market is getting a lift from a fall in mortgage rates after they surged last year. But housing accounts for a small fraction of the economy, meaning the recovery in activity is unlikely to have a huge impact on gross domestic product.

Growth forecasts for the first quarter are between a 1.5 percent and 2.3 percent annualized rate. The economy grew at a moderate 2.2 percent rate in the fourth quarter after expanding at a brisk 3.4 percent pace in the July-September period.

The flat manufacturing output in March, together with a 0.8 percent drop in mining, led to a 0.1 percent dip in industrial production. Industrial output edged up 0.1 percent in February. It fell at a 0.3 percent rate in the first quarter after rising at a 4.0 percent pace in the fourth quarter.

Capacity utilization for the manufacturing sector, a measure of how fully firms are using their resources, slipped to 76.4 percent last month, the lowest in a year, from 76.5 percent in February. Overall capacity use for the industrial sector fell to 78.8 percent from 79.0 percent in February.

It is 1.0 percentage point below its 1972-2017 average. Officials at the Fed tend to look at capacity use measures for signals of how much “slack” remains in the economy — how far growth has room to run before it becomes inflationary.