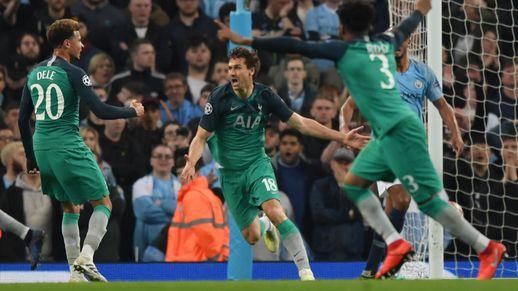 Sterling thought he had completed a stunning hat-trick in the dying the moments of a pulsating Champions League quarter-final but VAR intervened and Spurs went through to the semi-finals despite a 4-3 defeat on the night.

Sergio Aguero was adjudged to have strayed offside in the build-up, deflating City and meaning that Spurs would prevail with the score 4-4 on aggregate.

It was an incredible ending to a thrilling contest, which had seen both sides lead.

Sterling and Son Heung-min both struck twice in the first half, with Bernardo Silva’s deflected effort giving the hosts the lead.

An Aguero strike then put City in control of the tie but a bundled Fernando Llorente goal proved decisive for Spurs.