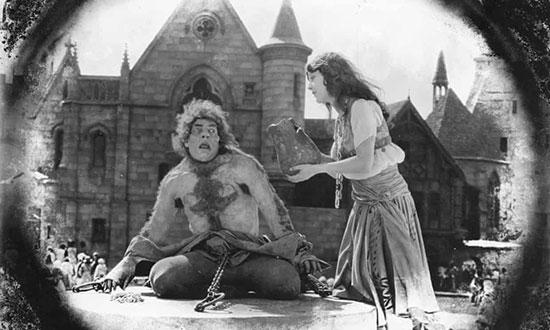 Lon Chaney as Quasimodo and Patsy Ruth Miller as Esmeralda in the 1923 film. Photograph: John Springer Collection/Corbis via Getty Images

Victor Hugo’s 19th-century literary classic Notre-Dame de Paris has soared to the top of France’s online bestseller list after the fire that ravaged the 850-year-old Paris cathedral on Monday night.

By Wednesday morning, different editions of the 1831 novel occupied the first, third, fifth, seventh and eighth slots in Amazon France’s bestseller list, with a history of the gothic architectural masterpiece taking sixth place.

The book is better known in the Anglosphere as The Hunchback of Notre Dame, the title given to its 1833 English translation.

The runaway success confirms a French tendency to seek solace in literature at times of national anguish: A Moveable Feast, Ernest Hemingway’s memoir of his time in the bars and cafés of 1920s Paris, became France’s fastest-selling book after the terror attacks of November 2015.

Hugo’s epic 11-volume novel is set in 1482 and tells the story of the beautiful Gypsy girl Esmeralda, who captures the hearts of many men – but especially the hunchback Quasimodo, the half-blind and deaf bellringer of Notre-Dame.

Many critics have argued that the cathedral itself is the real hero of the work, which the writer and campaigner began in 1829 partly to draw attention to the importance of the French capital’s gothic architecture, which at the time was being widely neglected, defaced or pulled down to make way for new buildings.

The novel went on to become a classic and is largely credited with helping to initiate a vast renovation of the crumbling cathedral – Hugo’s “majestic and sublime edifice” – in the mid-19th century, completed by the architects Jean-Baptiste-Antoine Lassus and Eugène Viollet-le-Duc.

In one often-cited passage from the novel, Hugo rages at the state of the building: “As much beauty as it may retain in its old age, it is not easy to repress a sigh, to restrain our anger, when we mark the countless defacements and mutilations to which men and time have subjected that venerable monument.”

A second, equally prophetic passage has circulated widely on social media in France since the fire that destroyed large parts of the cathedral’s roof and sent its spire toppling into the nave.

“All eyes were turned to the top of the church,” Hugo wrote. “What they saw was most strange. Upon the top of the topmost gallery, higher than the central rose-window, a vast flame ascended between the two belfries with whirling sparks.

“A vast flame, fierce and strong, fragments of which were borne away by the wind with the smoke. Below this flame … two spouts, terminating in gargoyles, vomited sheets of fiery rain, whose silvery streams shone out distinctly against the gloom of the lower part of the cathedral front.”