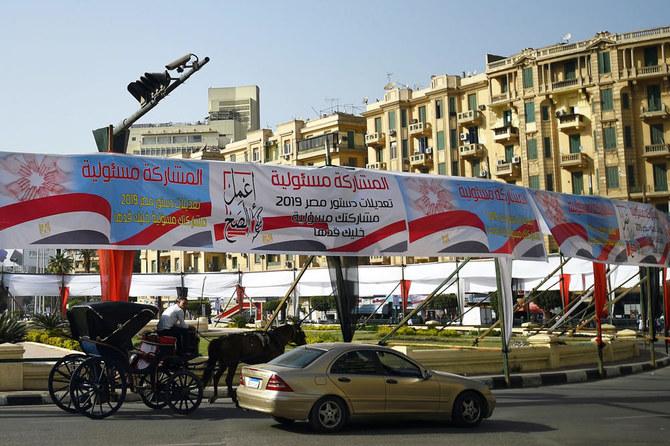 CAIRO: In a referendum bucking the trend of the region’s mini-Arab Spring, Egyptians are to start voting Saturday on constitutional amendments that extend President Abdel Fattah El-Sisi’s rule until at least 2024.
The vote running from April 20-22 was officially announced on Wednesday, a day after parliament overwhelmingly approved the changes extending presidential terms from four to six years.
The amendments — widely expected to pass in the face of minimal opposition — would prolong El-Sisi’s current term to 2024 from 2022 and allow him to then run for another six-year term.
They also include giving the military greater influence in political life, granting El-Sisi wide control over the judiciary and broadening the jurisdiction of military courts over civilians.
Egypt has been preparing for the referendum at the same time as parliament debated the amendments since the start of April.
Banners and billboards have gone up across the capital Cairo in the past weeks urging people to take part.
Many carry slogans implicitly urging people to back the amendments by doing “the right thing,” while others sponsored by the pro-government Nation’s Future party call outright for a “Yes” vote.
The referendum comes after two veteran presidents, Abdelaziz Bouteflika and Omar Al-Bashir, were ousted in Algeria and Sudan, respectively, this month following mass street demonstrations.
MP Mohamed Abu-Hamed, who pushed for the constitutional amendments to keep El-Sisi in power, is adamant the changes are needed to allow the president to complete political and economic reforms.
El-Sisi “took important political, economic and security measures… (and) must continue with his reforms,” in the face of the unrest gripping neighboring countries, the deputy told AFP.
The Soufan Center, however, said Thursday that the amendments would “solidify El-Sisi’s grip on the Egyptian political regime.”
“There is little observable public opposition to the constitutional changes, likely a result of the oppressive nature of the Egyptian government,” said the think tank.
Under El-Sisi, “Egypt has become even more autocratic than it was under (long-time ruler Hosni) Mubarak,” it said.
As army chief of staff at the time, El-Sisi led the military’s overthrow of elected president Muhammad Mursi in 2013 following mass protests against the Islamist leader’s rule.
He won his first term as president in 2014, three years after the uprising that toppled Mubarak, and was re-elected in March 2018 with more than 97 percent of the vote, after standing virtually unopposed.
His government has been widely criticized by human rights groups for the repression of political opponents.
But the “recent political upheavals in Algeria and Sudan have little hope of being replicated in Egypt, where the initial murmurings of the Arab Spring have since been silenced,” said the Soufan Center.
Other constitutional amendments include a quota for women’s representation of no less than 25 percent in parliament and forming a second parliamentary chamber.
Activists including Human Rights Watch have blasted the main changes as part of a campaign to cement El-Sisi’s “authoritarian rule.”
Amnesty International said that by approving the amendments, parliamentarians had shown a “complete disregard for human rights.”
The haste with which the referendum has been pushed through prompted Egyptian and international human rights groups to call the electoral process “unfree and unfair.”
“The current national climate in Egypt is devoid of any space in which a… referendum can occur with… guarantees of partiality and fairness,” rights groups said in a joint statement.
Parliament’s small opposition “25-30 Alliance” is urging Egypt’s electorate to reject the amendments.
With the overwhelming majority of the media in the El-Sisi camp, dissenting voices have been largely restricted to social networks.