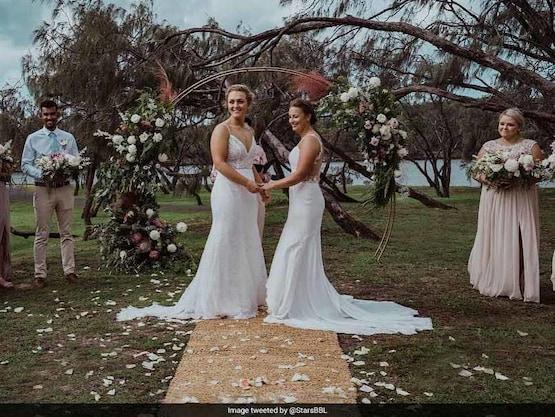 Hayley Jensen and Nicola Hancock have both appeared for Melbourne franchises in the Women’s Big Bash League.

New Zealand woman cricketer Hayley Jensen tied the knot with uncapped Australian Nicola Hancock last weekend. All-rounder Hayley Jensen, who played for Melbourne Stars in the first two editions of Women’s Big Bash League, made the move cross-town to the Melbourne Renegades for the third edition. On the other hand, Nicola Hancock still continues to represent ‘Team Green’ in the Australian T20 league. Melbourne Stars took to Twitter to announce the wedding and posted a beautiful picture from the ceremony. “From #TeamGreen, congratulations to Stars bowler Nicola Hancock who married her partner Hayley Jensen last weekend!” the picture was captioned.

Jensen, who won the Una Paisley medal as the best player in the Victoria Women’s Premier Cricket competition in season 2017/18, made her international debut for the White Ferns in 2014 and became the first ever female to score a century for the Melbourne Cricket Club when she struck 122 against Prahran in March 2015.

On the other hand, Hancock ended the latest edition of Women’s BBL as Melbourne Stars’ second-highest wicket-taker with 13 wickets from 14 matches at an average of 19.92 and best figures of 4/22 against the Sydney Sixers that helped her team win by seven wickets.

Same-sex marriage in New Zealand has been legal since 19 August 2013.

A bill for legalisation was passed by the New Zealand House of Representatives on 17 April 2013 by 77 votes to 44 and received royal assent on 19 April.

Van Niekerk and Kapp were the second couple among current international cricketers after New Zealand pair of Amy Satterthwaite and Lea Tahuhu to get married.