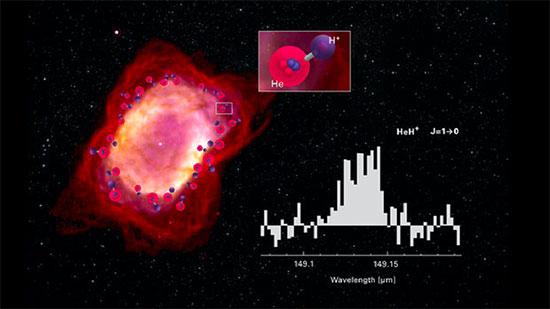 The most ancient type of molecule in our universe, which dates all the way back to the immediate aftermath of the big bang, has been found in space for the first time ever, an exciting new study has revealed.

A helium hydride ion (HeH+) was the first molecule that formed almost 14 billion years ago when a helium atom shared electrons with a hydrogen nucleus. It is thought to be the first chemical compound and formation of a molecular bond that took place when the universe was cooling after the Big Bang.

The molecule played an important role in the early development of our universe and set the stage for the creation of everything we know. “The chemistry of the Universe began with HeH+,” the study’s lead author Rolf Guesten told Chemistry World.

Until now, this important molecule has never been detected anywhere in the universe, casting doubts over our understanding of early chemistry. However scientists long believed it existed in the gas clouds which stars are made in and in the gas that stars expel when they die.

A team of scientists from the Stratospheric Observatory for Infrared Astronomy (SOFIA) observatory, a project between Nasa and the German Aerospace Center, detected the elusive molecule in a ring of gas around a dying star, about 3,000 light years away, in the constellation of Cygnus.

Scientists had previously been hamstrung in their efforts to find HeH+ because of limits in spectrometer technology. The team overcame this by using the high-resolution German Receiver for Astronomy at Terahertz Frequencies (GREAT) spectrometer to detect the infrared signals emitted by helium hydride ions.

“This brings a long search to a happy ending and eliminates doubts about our understanding of the underlying chemistry of the early universe,” Guesten said in a statement.

The findings were published in the journal Nature this week.