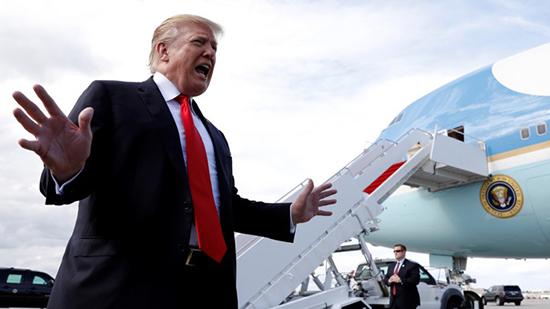 President Donald Trump, backed by his attorney general, declared himself fully vindicated on Thursday in the investigation into Russian election meddling and alleged collusion with his campaign – even before the American people and lawmakers see the full probe report.

“Game Over,” Trump tweeted, using a “Game of Thrones” style montage that pictured him standing in dramatic fog.

His attorney general, Bill Barr, already revealed four weeks ago in a brief summary that Special Counsel Robert Mueller had emphatically declared there was no collusion between Trump and Russians seeking to influence the 2016 presidential election in his favor.

And in a nationally broadcast press conference held right before the report’s expected release, Barr repeatedly drove that point home.

“We now know that the Russian operatives who perpetrated these schemes did not have the cooperation of President Trump or the Trump campaign,” Barr told reporters, in a statement that effectively sought to spin perceptions of the report before it was made public.

“The special counsel found no collusion by any Americans,” Barr said.

“That is the bottom line.”

The extreme secrecy surrounding Mueller’s nearly two-year investigation was to end abruptly at about 11:00 am (1500 GMT) when the 400-odd pages of the report are made public to Congress, the media and the public.

The report’s publication will mark a new peak in a political storm raging over Washington throughout the first half of Trump’s first term in office.

While leftist opponents long hoped that Mueller would either charge Trump with crimes or provide evidence for impeachment, the outcome so far has favored the divisive, right-wing Republican president.

“NO COLLUSION. NO OBSTRUCTION,” a triumphant Trump wrote in his “Game of Thrones” pastiche tweet.

‘Angry’ But Not Criminal

Barr emphatically sought to clear Trump of allegations that his actions – including his public attacks on Mueller and firing of then FBI chief James Comey – were not legally actionable.

The Trump-appointed attorney general had already asserted this in his summary of Mueller’s report a month ago, despite noting that Mueller himself had been unable to rule clearly on the issue.

At his press conference, Barr said he was standing by his own ruling, noting that Trump had no intention to obstruct and had merely been “frustrated and angered.”

“And at the same time, the president took no act that in fact deprived the special counsel of the documents and witnesses necessary to complete his investigation.”

Debate to rage on

Publication of the report – minus parts blacked out for legal or security reasons – will in theory give everyone a chance to get the full picture on a scandal that has been tangled in conspiracy theories.

But given the volcanic political temperature in Washington and the left-right chasm through the rest of the country ahead of Trump’s 2020 re-election bid, the debate over what really happened is likely to rage on.

At a minimum, the details – based on exhaustive interviews by Mueller’s prosecutors with Trump insiders – could paint an unflattering picture of the president and his links to Russia, including a previously undeclared real estate project in Moscow.

The deeper analysis of whether he committed obstruction of justice could also provide headaches for the White House.

Trump himself is supremely confident that his opponents have failed in what he claims was high-level “treason” to destroy his presidency.

“The Greatest Political Hoax of all time! Crimes were committed by Crooked, Dirty Cops and DNC/The Democrats,” the president said before Barr took the podium, reprising many of his favorite slogans about his opponents.

Claiming that Barr has been working to hamper and whitewash the Russia report, Democrats will push for still more details and testimony in the near future — including from Mueller himself.

“It is clear Congress and the American people must hear from Special Counsel Robert Mueller in person to better understand his findings,” House Judiciary Committee Chairman Jerry Nadler tweeted.

Nadler set a deadline of May 23 for Mueller to come to Capitol Hill.