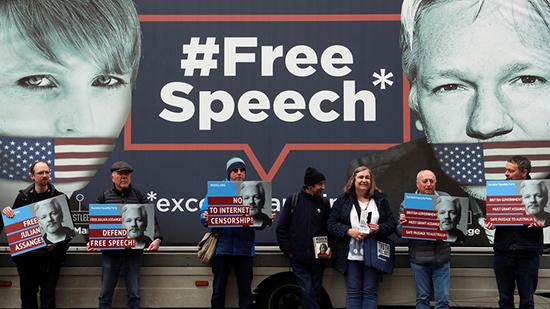 WikiLeaks has called for the US Justice Department to remove some of its redactions to the Mueller report, claiming that the blanked-out sentences only fuel conspiracy theories about WikiLeaks’ role in Trump’s election.

“WikiLeaks has always been confident that this investigation would vindicate our groundbreaking publishing of the 2016 materials, which it has. We disapprove of the large redactions which permit conspiracy theories to abound. Full transparency please,” WikiLeaks tweeted on Thursday.

Some observers wondered whether WikiLeaks disputes Mueller’s claim – expounded in the report – that ‘Russian hackers’ had stolen Democratic National Convention emails in 2016. Large chunks of text concerning the supposed hacking operation are left blank in Mueller’s report, to protect the investigative techniques used.

Moreover, Mueller’s report never established precisely how the  hackers – supposedly affiliated with Russia’s GRU intelligence agency – actually transferred the information to WikiLeaks. Wikileaks founder Julian Assange repeatedly denied that the emails had come from Russia, and had reportedly told a US congressman that the DNC breach was an “inside job.”

Likewise, large blocks of text regarding the Trump campaign’s contact with WikiLeaks are obscured, as they would cause ‘harm to an ongoing matter,’ possibly the ongoing case against Republican operative Roger Stone, who allegedly had made false statements to prosecutors about his own contact with WikiLeaks.

The report did make clear that WikiLeaks’ publishing of the supposedly hacked materials “would not be criminal unless the publisher also participated in the underlying hacking conspiracy.” Donald Trump Jr.’s brief Twitter contact with WikiLeaks, and retweeting of a link to the leaked emails of Clinton campaign chairman John Podesta, therefore were not criminal acts.

As pundits and politicians pore over the Mueller report with a magnifying glass, Assange himself is currently in police custody in London, after British police removed him from the city’s Ecuadorian embassy last Thursday. He is awaiting sentencing for skipping bail in 2012, and US authorities are simultaneously preparing an extradition case against him, for his alleged involvement in the hacking of classified US military files in 2010.

“Arrest warrant and extradition request for Assange is for wikileaks exposing war crimes in 2010,” WikiLeaks Editor-in-Chief Kristinn Hrafnsson tweeted on Thursday. “Despite this, US media has been insisting on talking about 2016 in interviews all week.  Publishing truths is not a crime. Was not in 2010 nor 2016, nor ever. Period.”EditDelete