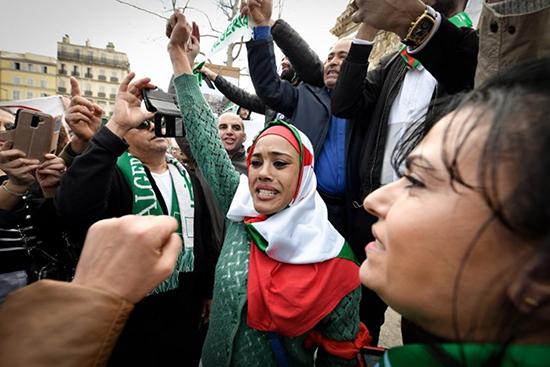 Protesters shouted slogans including “Down with the System!” or “You ate the country, you bunch of thieves.”

ALGIERS, Algeria: Protesters in Algeria demonstrated for a ninth straight Friday against the country’s leadership amid calls for the departure of the powerful military’s chief of staff.

With police forces deployed across the city, several thousand protesters gathered in the morning at the main post office in Algiers — the Grande Poste — which has been a landmark during the weeks of protests that have already forced former president Abdelaziz Bouteflika to stand down.

Protesters shouted slogans including “Down with the System!” or “You ate the country, you bunch of thieves.”

Belaiz was one of three figures in the interim government whose removal has been demanded by pro-democracy protesters. They are seen as part of the discredited regime of Bouteflika, who resigned April 2 after six weeks of nationwide demonstrations calling for an end to his two-decade rule. The new council president is Kamel Feniche, a magistrate.

Mustapha Bouchachi, a veteran lawyer and human rights activist, told The Associated Press “the peaceful mobilization should continue until the departure of all the system’s faces. The movement should remain united to achieve the dream of a democratic Algeria with equal rights for all. ”

Earlier this week, Gaid Salah called on Algerians to show patience during the political transition ahead.

A presidential election has been set for July 4 to choose the successor to Bouteflika.