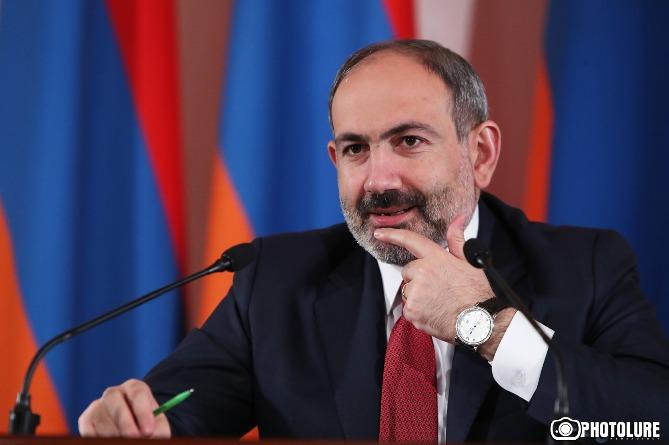 YEREVAN, April 22. /ARKA/. On April 19 Armenian Prime Minister Nikol Pashinyan held a consultative meeting in the framework of the fight against corruption on the subject of non-conviction based asset forfeiture. The meeting was attended by heads and representatives of interested public agencies and government departments, the government press office said. It said opening the discussion, Prime Minister Nikol Pashinyan stated, in part:

“Dear colleagues, am glad to see you. Today we have gathered to take stock of the interim discussions that we had on the issue of the institution of non-conviction based asset forfeiture. You know that a task force had been set up to this end, and as a result of its activities, we already have a draft law of the Republic of Armenia, referred to as “On confiscation of ill-earned assets.”

This is a very important topic, and it has been widely discussed in the past few months on different platforms. In some cases, there are even such interpretations that attempts are being made to introduce the functions of an extraordinary court, and sometimes it seems that this topic began to be discussed after the non-violent velvet popular revolution in Armenia, and the explanations on these issues were incomplete.

Before proceeding to the discussions, I want to give some information about what kind of history and what justifications this process actually has. First of all, the non-conviction based asset forfeiture is stated in the 2004 UN Convention against Corruption, which states that countries should take the necessary measures to allow for the seizure of such property without the need for a criminal conviction in cases where the wrongdoer is dead, has fled the jurisdiction, or is immune from prosecution, and in other relevant cases. Note that the Republic of Armenia ratified this Convention without any reservations in 2007.

To this end, since 2011, the Interdepartmental Commission on Combating Money Laundering and the Financing of Terrorism was set up, which discussed the possibility of introducing this system. In particular, the Commission’s 25th meeting in 2011, the 26th meeting in 2012, and the 28th meeting in 2013 discussed the issue and, finally, the 33rd meeting in 2017 approved a program of action, on the basis of which a task force was established, composed of representatives from different departments. The task was to present the possibilities of introducing the aforementioned institution in Armenia, as well as introducing international norms on the legality of property acquired through grave crimes and study the international experience available in this field. The task force has developed and put into circulation working papers. Discussions were organized, involving representatives from the Interdepartmental Commission-affiliated agencies.

It should be noted that since 2008, the Interdepartmental Commission on Combating Money Laundering and Financing of Terrorism has been headed by Central Bank Chairman Arthur Javadyan. The Commission’s members are as follows: Deputy Prosecutor General, Deputy Minister of Justice, Deputy Chairman of the State Revenue Committee, Deputy Director of the National Security Service, Deputy Chief of Police, Assistant Prime Minister, Chairman of the Criminal Chamber of the Court of Cassation, Deputy Minister of Finance and 6 senior officials representing the departments involved in fight against money laundering and terrorist financing. That is, this process started as early as in 2008.

At its 34th meeting in 2018, the aforementioned commission approved the concept of introducing the institution of non-conviction based asset forfeiture, stipulating the wrongdoer’s obligation to provide evidence on the legality of assets in case of grave or especially grave crimes. On this basis, a decision of the Prime Minister was passed on March 1, 2019 to set up a task force with the participation of the aforementioned agencies, as well as involving the representatives of the Office of the Human Rights Defender. The task force was to develop and submit a relevant legislative package in accordance with the fundamental human rights and freedoms guaranteed by the Constitution of Armenia.

As to the essence of the institution, in order to avoid any misinterpretations and comments taken out of the context, I should emphasize that in no way the non-conviction based asset forfeiture should be construed as implementation of punitive measures against a person. On the contrary, this is by its nature a preventive measure and, as noted in the World Bank’s Asset Recovery Handbook as published by the Stolen Asset Recovery Initiative, as well as in the above concept, the procedure is carried “against assets that is not a legal punishment and cannot have criminal consequences.”

It is also important to note that this institution is an effective mechanism used by many countries to take crime-related property away from economic turnover, while increasing the effectiveness of the fight against money laundering.

However, the above-mentioned document says that one of the most important principles for introducing this institution is that “the confiscation of assets outside criminal proceedings should not be deemed as a substitute for criminal prosecution that may allow law enforcement agencies or offenders to circumvent prosecution and criminal prosecution, given the fact that crime should be fought primarily in the framework of court proceedings.”

The introduction of the institution of non-conviction based asset forfeiture is primarily aimed at creating appropriate legal mechanisms as part of international cooperation to recognize decisions of the courts of Armenia and foreign courts and confiscate property without criminal proceedings within the framework of civil proceedings.

With regard to the relationship between the institution and the fight against money laundering and the financing of terrorism, it is primarily enshrined in the international conventions and other documents that we have listed. On their basis, international organizations, including the Council of Europe and the relevant UN structures carried out assessments, the results of which were presented in the previous explanation provided by the Central Bank of Armenia on this topic.

Here, it should be noted that in connection with the implementation of the aforementioned institutions, the applicable international conventions allow for some reservations. In particular, Paragraph 4 of Article 53 of the Council of Europe Convention on Laundering, Search, Seizure and Confiscation of the Proceeds from Crime and on the Financing of Terrorism stipulates that any country has the possibility of non-use of certain articles, including the aforementioned provisions on asset confiscation.

The absence of reservations by the Republic of Armenia suggests the possibility of introducing an appropriate institution. As I have already said, the noted questions have been discussed for a rather long time, and now we seem to have reached the final point. I would like to state those international documents governing this institution: the UN Convention against Corruption, the Council of Europe Convention on Laundering, Search, Seizure and Confiscation of the Proceeds from Crime and on the Financing of Terrorism.

In the context of the fight against money laundering and terrorism financing, the commitment to introduce the institution of non-conviction based asset forfeiture is established by the 4th recommendation of the Financial Action Task Force on Money Laundering (FATF).

The above conventions were ratified by the Republic of Armenia, as I have already said, in 2007 and 2008, and the obligation to implement the recommendations of the FATF stems from Armenia’s accession to the Council of Europe.

I also consider it worth stressing that the Republic of Armenia has established contacts and worked with international partners on this topic. The requirements for introducing the institution of non-conviction based asset forfeiture discussed with various international structures as part of evaluating Armenia’s compliance with the aforementioned international instruments.

In particular: In 2015, the MONEYVAL Committee of the Council of Europe approved the evaluation report for the 5th stage of implementation of the FATF recommendations, which states that the Republic of Armenia should consider introducing the institution of non-conviction based asset forfeiture in order to improve the practice of confiscating ill-earned assets.

In 2018, the Organization for Economic Cooperation and Development approved the fourth stage of the report on the compliance of the Republic of Armenia with the UN Convention against Corruption, which states that the institution of non-conviction based asset forfeiture has not been as of yet introduced in Armenia. The report calls on the Republic of Armenia to introduce the new tools provided for by the Convention, including the aforementioned institution in a bid to improve the effectiveness of criminal investigations.

Dear colleagues, in fact, there is nothing new in what I said. These data have been published several times, including by the Central Bank. Prior to this discussion, I thought it necessary to compile the information we have in order to avoid political speculations. This is a normal process that is taking place in the Republic of Armenia.

And, of course, there is also some connection with political processes, because it would be hard to believe that without political changes in the country real steps would be taken to introduce this institution.

But now our task is not only to implement this institution, but also to resolve the following issues: We must be sure that this is an effective mechanism for the return of stolen assets. That it cannot be a mechanism of political vendetta. That all the way through this process, we will be able to ensure full protection of human rights, and the Republic of Armenia will not face any negative impact, I mean our country’s image as seen from the perspective human rights.

Nevertheless, it is also crucial for us to transfer the fight against corruption from the declarative level to the institutional level. I want to say that from the point of view of the purely investment environment, we are facing specific problems. Of course, in some cases, the law enforcement authorities have already taken concrete action. You know that both the Special Investigation Service and the Investigation Committee, if I am not mistaken, have already provided certain information to the Ministry of Territorial Administration and Development in order to return to the State illegally privatized public assets. Also, it is clear that investors often face land acquisition-related problems.

For example, I received a lot of emotional reactions from specific investors when they were offered illogical prices for the purchase of land, that is, these owners are trying to sell some kind of real estate for several million dollars. Some investors hired lawyers to find out, for example, who owns such property and at what price it had been acquired.

It turns out that they belong to high-ranking officials, acting or former, in this case it does not matter, and that the property was acquired, for example, at ridiculous prices, and now they are trying to sell them at 1,000, 2,000, 3,000, 10,000 percent the original tender price. We need to formulate an unemotional, calm attitude towards these issues in order to understand how we can solve these problems.”

The meeting next went on to discuss issues related to the introduction and use of the institution of non-conviction based asset forfeiture. Issues related to the mechanisms and law enforcement tools, the nature and types of crime, the scope of the subjects, banking confidence, etc. were also discussed during the meeting.

Prime Minister Pashinyan stressed that the law of the Republic of Armenia “On confiscation of ill-earned assets” should target corrupt officials, those involved in money laundering and the members of criminal groups.

The Head of Government instructed to summarize the bill and submit it for international examination. Nikol Pashinyan reiterated that the non-conviction based asset forfeiture is important in the fight against corruption, and the legal mechanisms for implementation of that process should meet the best international standards in terms of protecting human rights, in terms of observing bank secrecy and in terms of fighting corruption.