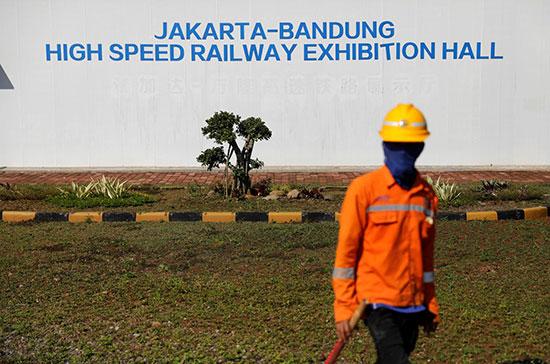 WALLINI, Indonesia (Reuters) – In a rural part of Indonesia’s Java island, two orange-clad workers confer in Mandarin over plans to lay tracks on a stretch of a $6 billion high-speed rail project between the capital Jakarta and the textile hub of Bandung.

Both are employees of the state-owned China Railway Engineering Corp (CREC), and have previously worked on a rail project in Uganda, another part of Beijing’s sweeping multi-billion dollar “Belt and Road” initiative (BRI) to connect China with Asia, Europe and beyond.

When China hosts its second summit of nations that are part of BRI this week, Beijing is likely to showcase the Indonesian project along with its recent success in getting Malaysia’s East Coast Railway Link (ECRL) back on track after months of negotiations.

Analysts say the two projects will be held up as China’s answers to criticism about high debt and the lack of transparency in the BRI and its attempt to refocus the program on sustainable financing, green growth, and high quality.

China’s foreign ministry said last week Beijing would “work together with all parties to benefit people across the world by jointly promoting the high-quality development of BRI in line with the national conditions of each country”.

The BRI is a key policy of Chinese President Xi Jinping but has been controversial in many Western capitals, particularly Washington, which views it as a means to spread Chinese influence abroad and saddle countries with unsustainable debt through nontransparent projects.

According to a draft communique seen by Reuters, participants at this week’s summit will agree to project financing that respects global debt goals and promotes green growth.

“This bucks the trend of recent negative headlines around the BRI and challenges facing projects in several countries,” said Peter Mumford at the Eurasia Group consultancy.

But in Malaysia, Prime Minister Mahathir Mohamed agreed to put the 668-km ECRL back on track only after cutting the cost of the project from $16 billion to $10.7 billion.

“The risk for China is that other countries, having seen Mahathir’s success, now try to adopt similar tough re-negotiating tactics on BRI projects, which could slow progress elsewhere,” said Mumford.

To be sure, there is no sign of any of the BRI countries attempting to re-negotiate deals signed with Beijing. Analysts say China is likely to use its willingness to work with partner nations and make projects feasible to seek more business.

Bankers familiar with the deal say the Indonesian project is being constructed under “gold-plated terms”.

Of the total $6 billion cost, China’s Development Bank will provide a $4.5 billion loan at 2 percent interest, according a project prospectus seen by Reuters. The remaining 25 percent of the project cost will be funded by equity provided by the consortium.

The loan will have no sovereign guarantees, which are among the most controversial parts of Belt and Road projects, as they shift risk onto the governments of partner countries.

Beijing lobbied hard against Tokyo in 2015 to win the Indonesian project as a way to showcase its high-speed rail expertise to international customers.

“China wanted to deliberately show that its fast train was better than Japan … we asked for the lowest rate possible and they gave 2 percent,” Rini Soemarno, Indonesia’s minister for state-owned enterprises, told reporters earlier this year.

The railway’s financial terms came under debate during April’s presidential election between Indonesian President Joko Widodo and challenger Prabowo Subianto, who pledged to review the project if he pulled off a victory.

While the results are still to be officially confirmed, sample vote counts by independent pollsters show Widodo to be headed for a second term.

At the project site, there seem to be no doubts that it will be completed. Deep in Indonesia’s tea country, workers are directing drilling machines into a hillside, displacing red earth to carve out two tunnels that will lead to the station of Wallini, a tea plantation near Bandung.

Chinese workers there told Reuters they had been at the site for a year and expected to stay until the project’s completion in 2021. Four new satellite towns will be built by the train consortium along the route.

Widodo’s government is currently offering up to $91 billion in infrastructure projects to Chinese companies, according to Luhut Pandjaitan, the coordinating minister for maritime affairs, who said Chinese officials have toured regional governments in search of projects to fund.

Two top officials told Reuters Widodo intends to lead a delegation to the Belt and Road forum, where some of those projects are expected to be signed.

One of the officials, Indonesia’s investment board chief, Thomas Lembong, told Reuters he expected this week’s summit to be a turning point, a “Belt and Road 2.0” with China more willing to negotiate.

“The Chinese leadership will do whatever it takes to make Belt and Road a success, even if that means making it more professionalised, transparent, and more cooperative,” he said.

The revival of the Malaysian project is likely to give China hope of securing another train project: the high speed rail (HSR) between Kuala Lumpur and Singapore, which was postponed by Mahathir after he initially threatened to cancel it.

“China will likely take heart from the ECRL outcome and focus their efforts on ensuring that the Kuala Lumpur-Singapore HSR remains on track,” Harrison Cheng, an analyst at Control Risks, told Reuters.

Beijing had been intent on being awarded the project to prove that its rail expertise could win over rivals in a first-world country like Singapore, with its diplomats describing it as a “must win at all costs project”.

Apart from CREC, consortiums from Japan, South Korea, Europe, Singapore and Malaysia are also in the race, if the project is revived.

A source in the Singaporean government said Malaysia would have to pay significant penalties to cancel the project altogether.

Mahathir as well as Singaporean Prime Minister Lee Hsien Loong will take part in this week’s Belt and Road summit, which could see China make a renewed push for the project.

Reporting by Fanny Potkin and Tabita Diela in JAKARTA and WALLINI; Additional reporting by Gayatri Suroyo and Cindy Silviana in JAKARTA, Sumeet Chatterjee in HONG KONG, Brenda Goh in SHANGHAI, Joseph Sipalan and Liz Lee in Kuala Lumpur, and Joe Brock and John Geddie in SINGAPORE, Editing by Ed Davies and Raju Gopalakrishnan