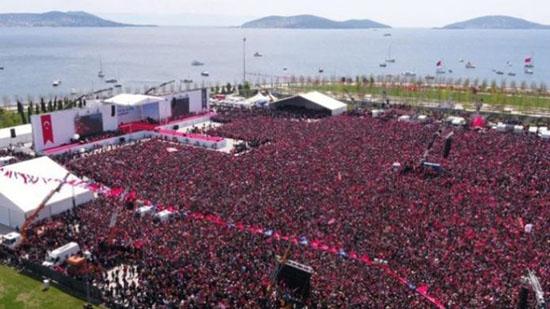 Elected through an alliance of the opposition Republican People’s Party (CHP) and the İYİ (Good) Party, İmamoğlu refused to allow political party flags into the square where the rally was held.

“I came here to promise a new beginning to İstanbul,” he told the thousands in attendance.

Although Turkey’s Supreme Election Board (YSK) officially declared him the new mayor on Wednesday, an objection from the ruling party and its ally is still pending.

As a lesser-known figure in politics, İmamoğlu’s success in the local election on March 31 was a surprise to many.

“I wanted to bring to mind three lessons that have emerged from the local elections,” he said, “First of all, politics should be done with respect, care and honor. Secondly, the fundamental goal of politics is the happiness of the people. Thirdly, everyone may have a different world view, but creating a clash between these world views is not politics.”

President Recep Tayyip Erdoğan polarized the political environment in Turkey during the election campaign, even showing video footage of a mosque shooting in New Zealand to exploit the religious sentiment of his constituency.

“The era of politicians who act in arrogance against the citizens has ended,” İmamoğlu said.

Meanwhile, CHP leader Kemal Kılıçdaroğlu on Sunday was assaulted by an angry group at the funeral of a martyred Turkish soldier.

The pro-government media have been attacking CHP politicians for making an alliance in the local elections with the Kurdish Peoples’ Democratic Party (HDP), which President Erdoğan and his ruling party depict as an extension of the PKK, despite the fact that it is represented in the Turkish parliament.