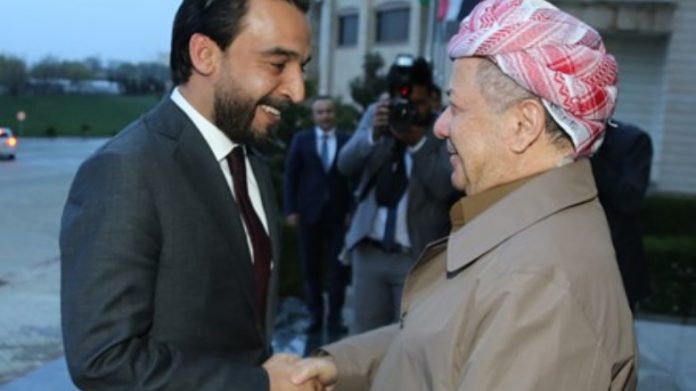 During the meeting, the two “discussed the political situation in Iraq, and the latest political developments, and steps to complete the new government cabinet in Iraq,” a statement on Barzani’s official website read.

The KDP leader and Halbousi highlighted relations between the Kurdistan Regional Government (KRG) and the Iraqi government which have improved following a fallout in the aftermath of the Kurdish referendum in September 2017.

Barzani “assessed the positive atmosphere prevailing between the [Kurdistan Region] and Baghdad,” noting that strong ties between the KRG and Iraq are “in favor of stability and prosperity throughout Iraq,” the statement continued.

The situation in Nineveh province and the conditions of the people in the governorate was another topic the two sides discussed, it added.

“Both sides stressed the intensification of efforts to restore services, stability, and safety for the citizens of Mosul governorate.”

Halbousi’s trip comes two days after a parliamentary delegation from the Kurdistan Region visited Baghdad to meet with an Iraqi counterpart and participate in the summit held in the capital between top legislators from Iraq’s regional neighbors.

Upon arrival at Erbil International Airport in the afternoon, the speaker was welcomed by his Kurdistan Region counterpart Vala Fareed. Following this, they held a meeting, attended by deputy parliament speakers from both sides, among other officials.