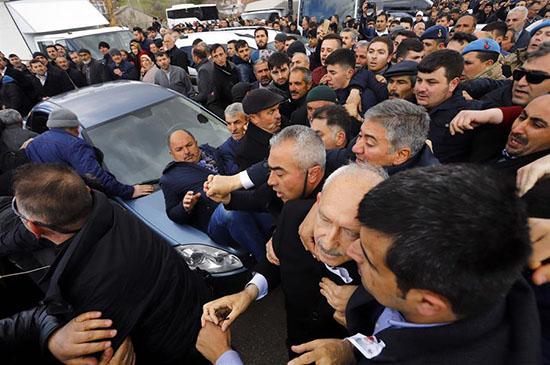 Nine people have been detained in the assault of Turkey’s main opposition party leader during a soldier’s funeral, said Interior Minister Süleyman Soylu on April 22.

Several protesters threw punches at Republican People’s Party (CHP) leader Kemal Kılıçdaroğlu at the funeral in Çubuk district of Ankara on April 21.  After the attack, the CHPchief was taken to a nearby house for security reasons and then taken away in an armored vehicle. The police launched a probe into the attack and detained nine attackers, including a woman. Three of them were released later.

The chief suspect, Osman Sarıgün, was arrested in Sivrihisar in central Anatolia and taken to Çubuk. The ruling Justice and Development Party (AKP) has said that Sarıgün was determined to be a member of the AKP and will be expelled from the party.

AKP spokesperson Ömer Çelik said on Twitter that the attack suspect, Sarıgün, will face disciplinary procedure to be dismissed from the party.

“Our Ankara Executive Board has decided to send him to the disciplinary board for his dismissal from the party. AK Party is against all forms of violence. Our principle absolutely rejects violence. There is no place for violence in democratic politics,” Çelik said.

CHP officials blamed the AKP for provoking the attack and demanded those detained be held accountable. They called for the interior minister to resign over the incident.  “This is not an ordinary attack; this is not an ordinary provocation. This is planned,” CHP Istanbul chief Canan Kaftancıoğlu told several thousand supporters at a rally in the city.

While campaigning for the local polls, President Erdogan often accused Kılıçdaroğlu and the CHP of backing the outlawed Kurdistan Workers’ Party (PKK) and showed videos of the opposition leader at his rallies.

Kılıçdaroğlu should question the reason for the incident with his political allies instead of burdening the interior minister with the responsibility, Soylu said.

“CHP was a partner with the HDP before the elections. The nation’s memory does not forget about it,” Soylu said. ““Everyone must take sides against the [PKK].”

Soylu also stated that the CHP did not inform his ministry about Kılıçdaroğlu’s visit to the funeral. He also noted that the probe did not find evidence of any organized provocation of the attack against the main opposition leader.

However, the CHP leader Kılıçdaroğlu argued that the attack on him was “pre-planned.”

“Protests could be acceptable, but this attack is different,” he told reporters on April 22. The attack aims to provoke CHP to pour into streets, he added.