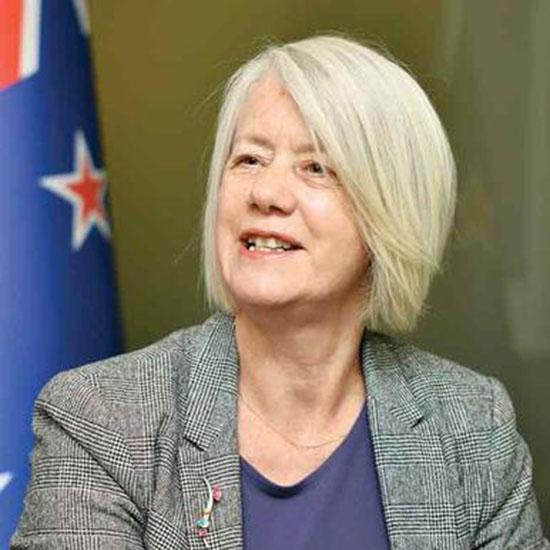 Modern Turkey founder Mustafa Kemal Atatürk’s generosity following the war in Gallipoli has created a permanent friendship with New Zealand, a bond that became stronger following the terror attack against two mosques in Christchurch in March, according to Wellington’s envoy to Ankara.

This year’s commemoration at the Gallipoli Peninsula on April 24 Anzac Day will become an even more special occasion, says Ambassador Wendy Hinton.

Let’s first talk about what Anzac Day means for New Zealand and what kind of bond it establishes between Turkey and New Zealand. Turks usually complain that Turkey is not well-known in the world. Does that mean, for instance, that despite the distance New Zealanders know about Turkey much better?

Anzac Day is really a very significant day for New Zealand. Not necessarily because of what happened on the Gallipoli Peninsula. Because I think it was that period of time in which NewZealanders realized that they really stood for something.

We were sending young men to the other side of the world to fight for a cause. It was such watershed event in New Zealand’s history when we lost so many of our young population.

It was then when New Zealanders realized that we stood for something; that we were not just far-flung of the British Empire, that we were a country, we were a nation. We like to think that New Zealand’s nationhood stand from those moments.

It also marks the emergence of a really important friendship with Turkey. Because the founder of your republic, Atatürk, was generous in the victory which Turkey won at that particular time in WWI, and he said: “If you have lost your sons on our soil, they became our sons.” This generosity of spirit has forged a permanent and longstanding friendship between New Zealand and Turkey. And everybody in New Zealand knows about that.

It is part of our national curriculum, and traveling to Turkey to the Gallipoli Peninsula is a long-standing tradition.

How many families come visit Turkey for Anzac Day? Should we assume people in New Zealand know more about modern Turkey?

For Anzac day itself we have several hundred New Zealanders. I would say a thousand of New Zealanders come every year to Turkey; both on Anzac Day, but at every time of the year as well.

Especially those who have been travelling here; they do research and see how it has evolved since 1915.

Is it reciprocal? Do you think that Turks know about New Zealand? It seems we know about Australians more.

Probably less. You might know more about Australia since there is a bigger Turkish population in Australia than New Zealand.

How do you think the terror attack will affect this year’s commemorations at the Gallipoli?

I think initially people were a little bit cautious because some thought that in some part of the Muslim world, people were blaming New Zealanders for the attack. But I think since then it has become clear that that’s not case. And so the people that were initially cautious about coming here have now decided to come. So we don’t expect any big impact on the numbers. And we expect that actually that it will be a focal point for people to talk about it. This wear we will have the speaker of the parliament and a cross-party parliamentary delegation.

The attack shocked many of us here in Turkey too. We kept asking why NewZealand?

We ask ourselves the same question. We just had the bad luck to have some guy, some terrorist with the guns who came to live in New Zealand and insinuated himself into our very trusting community. Perhaps this created a gap; this guy saw that he could do more in New Zealand than he can in other countries. This is speculation of course.

No, definitely not. This was obviously a lone operator.

Immediately after the attack there was an impression that this could lead to some cool weather between the two countries. New Zealand was irritated by the fact that the footage was shown here during the campaign and I guess the Turkish side was a bit anxious that there might not be a proper investigation. How did the two sides fared with the situation?

There has been a very strong coming together between our two governments. Our very first high-level visitors to New Zealand were your vice president and your minister of foreign affairs. They met with their counterparts, the governor general, prime minister, foreign minister. So they started talking immediately, and that is the way to solve problems. And then we had, our minister of foreign affairs, who is also a deputy minister, who came to Turkey for an emergency session of the Organization of Islamic Cooperation which was held in Istanbul on the 22nd of March and again he met with Turkish foreign minister. There has never been any hint that relationship having suffered as a result of it.

In some way I think we understand each other very well, we have shared a lot of information; we have had mutual visits. It has actually perhaps forged a stronger bond between us.  Noting much positive can come from a terror attack but that had made us come together and think about issues that we might otherwise not have discussed.

Your prime minister’s stance was appreciated all over the world. Is she a particular case or do you think any other New Zealand prime minister would have acted like that?

She just did what came naturally to her and acted according to her instincts. She utterly condemned without reservations this attack and, of course, she brought stronger gun control and reacted in tougher ways, as well as the emotional way she has reacted.

Do you think the potential in the two countries’ relations are fulfilled in view of the historic bond that exists?

We need to add more layers to this relationship. We have not done so well, we could do better. One dimension is the trade and economic relationship. For instance, the Turkish agriculture sector needs investment, it needs technology. It needs a sort of expertise that New Zealand has to offer. That is just one area.

The Turkish side often complains about other countries not sharing the burden of Syrian refugees.

Normally, we would not give aid money to Turkey under the OECD guidelines. But because of the flow from Syria, we do work related to refugee children. We have built some schools down in the southeast for Syrian children. And also a lot of our aid goes through U.N. agencies.

Are you satisfied with the maintenance on the Gallipoli Peninsula?

The whole scenery is looked very well after. We are very lucky. The roads are currently being upgraded in order to cope with the increasing traffic. It has become a place that more and more Turkish visitors come. This has created a huge pressure on the governorship in Çanakkale in keeping all this infrastructure to accommodate the extra numbers. But we are very well looked after. We are always treated warmly as special guests.

WHO IS WENDY HINTON?

Ambassador Wendy Hinton took on the role as New Zealand’s ambassador to Turkey in March 2018. Wendy is also a non-resident ambassador to Israel and Jordan and an ambassador-designate to Azerbaijan.

Hinton is a senior career diplomat in the New Zealand Ministry of Foreign Affairs and Trade (MFAT). Most recently she was New Zealand’s ambassador to Poland and Ukraine between 2012 and 2017.

In her overseas duties, she served in the U.N. in Geneva, in Taipei and Singapore.

Hinton holds a B.A. in History and French from the University of Otago in Dunedin, NewZealand.