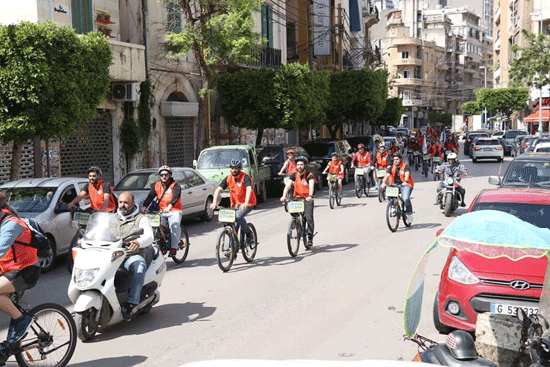 On Thursday, the 18th of April 2019, the Haigazian University community commemorated the 104th anniversary of the Armenian Genocide, during a solemn event, which took place in the University’s Mugar garden.

Students, faculty, staff, friends and neighbors walked through the aisle of the garden, placing white flowers under the “Forget Me Not” flower monument, on the sound of the “duduk”, gracefully played by student Sako Yacoubian.

On behalf of the Heritage Club, Meghry Kazanjian greeted the audience, while Minas Atamian accompanied by Ari Vartanian on the guitar sang the song of the “soldier”. For his part, Razmig Derounian eloquently delivered a poem by Kevork Emin, and Kevork Yacoubian shared his poem composed by himself for this special occasion.

The ceremony ended with the keynote address of the Campus Minister, Rev. Wilbert Van Saane.

Few days later, during the Easter weekend, a second event took place, raising public awareness on the Armenian cause and genocide.

Under the slogan of “1.5 million reasons to bike for a cause”, 40 students, wearing Haigazian vests, with the “Armenian Genocide” printed on their back, paraded on bikes in the streets of downtown Beirut for a one-hour-ride.