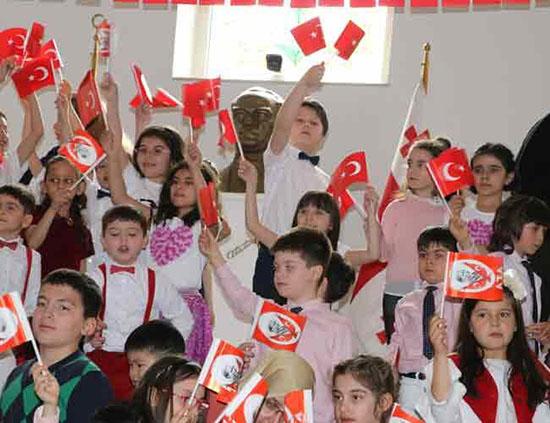 Turkey will observe National Sovereignty and Children’s Day on April 23 to celebrate the 99th anniversary of the founding of the Turkish Parliament.

Official ceremonies are scheduled in the Turkish capital of Ankara, and civil servants have the day off from work.

Sovereignty Day has been observed since Mustafa Kemal Atatürk founded of the Republic of Turkey, but in 1979, the holiday’s name was changed to National Sovereignty and “International Children’s Day.”

The name originated from state-Turkish Radio and Television Institution’s “TRT International April 23 Children’s Festival.” In the first year of the festival, Turkey hosted children from the former Soviet Union, Iraq, Italy, Romania and Bulgaria. Festival organizers have hosted thousands of children from 150 different countries over 39 years.

On the holiday, schoolchildren simulate a session of Parliament and elect a “president” who addresses the country on national television. On the day, children’s festivals take place throughout Turkey.

Official ceremonies are scheduled at the current Parliament, the first Parliament building, and Anıtkabir, the mausoleum of Atatürk.

An initial ceremony will be held at 9 a.m. with the laying of a wreath at the Atatürk Monument in Parliament. At 9:15 a.m., high-level state officials will attend the ceremony at Anıtkabir, and a commemoration will be held in the first Parliament building at 10 a.m.

Parliament Speaker Mustafa Şentop will give a commemoration speech in the first Parliament, before moving to the current Parliament to accept greetings.

The Parliament also will convene with a special agenda to celebrate the anniversary of its 99th inauguration.

Şentop and leaders of political parties are expected to address the General Assembly on the occasion.

Meanwhile, several Turkish children and their parents gathered on April 21 at their embassy in the South African capital Pretoria to commemorate National Sovereignty and Children’s Day.

“We held our celebrations two days earlier because it is a Sunday and children are off from school. We wanted them to participate in the celebrations because next week they will be back to school,” Elif Çomoülu Ülgen, the Turkish ambassador in South Africa, told Anadolu Agency.

The embassy organized several activities for children, including setting up inflatable jumping balloons, facing painting and Ebru art (paper marbling) among others activities.

“This National Sovereignty and Children’s Day indicates an important milestone in the Turkish national history of the Republic. It is the day when the Turkish Grand National Assembly was established in Ankara by Atatürk,” she said.

Ülgen said Atatürk dedicated the day to Turkish children as a gift because he knew the future lies with children.

“We gave the children a podium at the embassy to address us as politicians and world leaders. They expressed their views and were very excited,” she said.