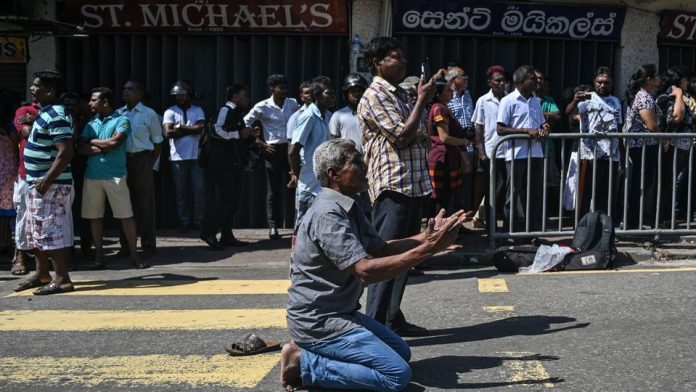 The Sri Lankan government has blamed the National Thowheeth Jamaath, a local extremist group, for the deadly attacks that claimed the lives of nearly 300 people but also suspects international organisations may be involved.

No group has claimed responsibility for the suicide bombings at churches and major international hotels, which killed 290 people and wounded 500 others – the deadliest attack in the island nation since the end of a civil war in 2009.

NTJ is a splinter group of the Sri Lanka Thowheeth Jamaat (SLTJ), a political group that fell under scrutiny for advocating hardline ideas on domestic issues – SLTJ’s founder and secretary, Abdul Razik has been arrested several times on charges of inciting religious unrest.

The group came to prominence in December 2018 when its followers were accused of attacking Buddhist statues in Sri Lanka’s Kegalle district – a move that outraged the country’s majority Buddhist community.

Hailing from Sri Lanka’s eastern town of Kattankudy, the NTJ promotes an aggressive form of Sharia law. Razik – also the group’s leader – has also previously advocated for underage girls to be married without their consent.

The group has a limited social media presence – its Twitter account (which posts in Tamil) has been inactive since March 2018 while its YouTube account which espouses hatred towards other communities, although updated regularly, has very few views.

Despite its limited social media presence, the Sri Lankan Muslim community has long been aware of the threat NTJ posed to security.

Hilmy Ahamed, vice president of the Muslim Council of Sri Lanka told Bloomberg he had alerted the Sri Lankan government about the existence of NTJ three years ago.

“I personally have gone and handed over all the documents three years ago, giving names and details of all these people. They have sat on it. That’s the tragedy,” Ahamed told Bloomberg.

But there are doubts over whether such a small, relatively unknown organisation has the capability to conduct a coordinated attack on a large scale.

Senaratne, who is also a cabinet minister, added that the government was investigating whether the group had “international support”.

“We don’t see that only a small organisation in this country can do all that,” he said.

Rohan Gunaratna, a Singapore-based security expert, said the Sri Lankan group is Daesh’s branch in Sri Lanka and perpetrators were known to have links to Sri Lankans who travelled to join the hardline group in Syria and Iraq.

Other security experts say they believe the attacks bore the hallmarks of militant groups Daesh or al Qaeda, citing the level of sophistication of the attacks.

“These synchronised attacks are out of the ordinary for Sri Lanka. Compared with similar attacks in the Middle East and Southeast Asia, it has the DNA of attacks carried out by Islamic State [Daesh] and al Qaeda,” said Alto Labetubun, an anti-terrorism expert who has researched the two groups for a decade.