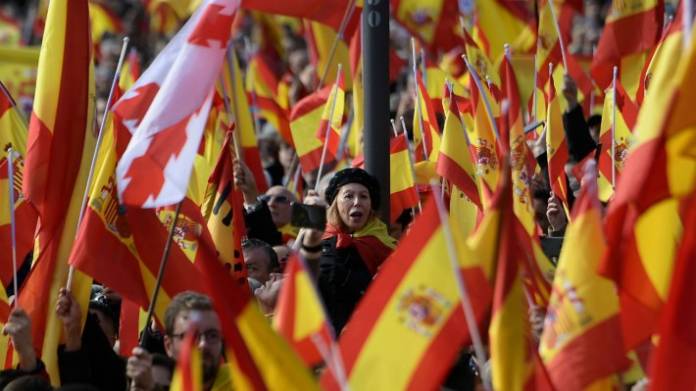 Unlike other European far-right parties, Spain’s Vox thinks fighting women’s rights is the key to success.

MADRID—On a recent Sunday, a compact huddle of about 100 principally middle-aged men and women slowly advanced onto Puerta del Sol square here in the Spanish capital. A canopy of pale pink and blue balloons swayed above them like a roving baby shower, the theme song from Pirates of the Caribbeanblaring from speakers nearby. A man carrying a megaphone led a chant, “Feminism doesn’t represent me.”

The “March for Femininity,” as the demonstration was called, was a counterprotest to an enormous International Women’s Day rally held two days prior, a historic affair that saw hundreds of thousands of women throughout Spain stream down their cities’ major avenues to demand the application and expansion of anti-gender-violence laws. That day, headlines hailed feminism in Spain as a force to be reckoned with. Nearly 65 percent of college-age women here embrace the label and, it follows, form a potent voting bloc for national elections being held this weekend. Politicians on both sides of the aisle have fallen at their feet, trying to lay claim to “real” feminism, whether that has meant touting gender-neutral speech or championing women-friendly economic policies.

The smaller march that followed, however, was decidedly not courting the feminist vote. In a gravelly voice, a small woman introduced as a dissident of gender ideology—the expression is used by the global far right to designate advances in women’s and LGBTQ rights—declared that it was in fact men who were being discriminated against under the law. The crowd responded with thunderous applause. The sexes were being pitted against each other, and the only way to restore the balance, the speaker said, was by voting against feminist legislation.

Only one party in Spain is currently making that argument, and the speaker at the rally, Alicia Rubio, helps run its get-out-the-vote efforts. That party is Vox.

Vox—the word is Latin for “voice”—was founded in 2013 by a handful of conservative politicians who’d grown disenchanted with the People’s Party, the traditional right-wing bloc in Spain, for not adopting more hard-line stances against secessionists and progressive legislation passed under the former Socialist government. But it burst into Spain’s national consciousness only late last year, when it campaigned and won 12 seats in the regional legislature in Andalusia, in southern Spain, the first time any of its candidates had been elected to office. The party’s shocking ascent to power was, at first, ascribed to its stance against separatism in the northern Spanish region of Catalonia—Vox called the country’s dominant parties soft on separatists and campaigned on a “Spain first” ticket.

In many ways, its rise mirrors advances made by populist and far-right parties across Europe. A decade of slow economic growth, dislocations caused by the global financial crisis, and the vast wave of migration that has hit Europe in recent years have fueled disenchantment with traditional political groupings across the region. Spain had, for a time, been a rare exception to that shift. And in a way, that remains the case: Whereas most of the continent’s populist parties want to either gut the EU or leave it altogether, Vox’s focus is different. While blatant anti-feminist rhetoric is often employed by political parties in eastern Europe, such efforts are markedly less frequent in the west of the continent. That was, of course, until Vox announced its first legislative push in Andalusia—to demand that the region’s gender-violence law be scrapped.

According to official figures, 992 women in Spain have been murdered by a partner or former partner since 2003. Though the term femicide—instances of women killed by men on account of their gender—wasn’t included in Spanish dictionaries until 2014, violence against women came into brutal focus with the murder of Ana Orantes in 1997, a woman from Granada who shocked the public, first when she spoke on an evening TV program about the abuse she suffered at her ex-husband’s hands for 40 years, and 13 days later, when her ex set her ablaze. Newspapers began tracking gender-based murders around 2000. In 2003, the government created its own registry, logging the number of women killed by partners or former partners. An independent study that includes femicides committed by men with no prior relationship with their victims estimates that the number is actually closer to 2,000. These figures, and numerous petitions by feminist organizations, prompted the national government to pass a historic anti-gender-violence law in 2004, allocating funds to support victims of abuse and calling for the creation of specific gender-violence courts. In late 2017, Spain’s parliament unanimously passed a series of measures designed to bulk up the original law. Even the People’s Party, which in 2013 threatened to roll back abortion rights, was on board.

Vox is the first party to challenge the consensus, claiming the law allows and emboldens women to falsely accuse men. In a 100-point program unveiled in October, as it was campaigning ahead of Andalusia’s elections, the party called for the repeal of anti-gender-violence laws, to be replaced with legislation providing “equal protection” for men, women, children, and the elderly in cases of domestic violence and the removal of abortion from government-funded health services.

The party also espouses what Sílvia Claveria, a politics professor at Carlos III University in Madrid, described to me as “modern sexism”: It advocates longer maternity leave and encourages women to be proud mothers, but once women want to separate from or divorce their partners, it shifts positions to take the man’s side. According to Manuela Carmena, the mayor of Madrid and a politician known for her efforts to promote women’s rights, Vox has sought to benefit from “the frustration and confusion of many men who feel displaced by the growing role of women in society.”

That strategy is apparent in remarks from Vox’s leadership. In a televised interview in January, the party’s president, Santiago Abascal, claimed that 87 percent of gender-violence accusations had been dropped because there was no evidence that the accused had committed a crime. (In fact, only 0.01 percent of gender-violence accusations are deemed false, according to datacompiled by the office of Spain’s attorney general. The Barcelona-based lawyer Júlia Humet told me that some are indeed withdrawn or dropped, but frequently this is due to the cycle of violence itself: Women often give their abusers another chance out of a sense of love or loyalty, Humet said, or because they’re pressured to do so.) Vox’s leader in Andalusia, Francisco Serrano, a former judge who was suspended from his post in 2011 for changing a child’s custody agreement to benefit the father, has claimed that “a real genocide is under way,” of men attempting or committing suicide over false accusations.

The debate surrounding false accusations in particular has become a focal point in Spain’s culture wars in the wake of a high-profile case in which a woman accused five men of gang-raping her at Pamplona’s world-famous Running of the Bulls festival. When the men were acquitted of rape and found guilty of a lesser crime last spring, women throughout Spain took to the streets in what was considered the country’s #MeToo moment. Last summer, as the movement gained momentum, a self-proclaimed feminist government took office and promised to revise rape laws and make gender equality one of its top priorities.

That soon sparked a backlash, with several thousand men denouncing on social media and the Spanish version of 4Chan, ForoCoches, what they saw as doing away with the presumption of innocence. In February, a purple bus inscribed with the slogan “#StopFeminazis” beneath an image of Hitler wearing pink lipstick could be seen driven around Barcelona. The organization that chartered the bus, Hazte Oír (“Make Yourself Heard”), is calling on Spain’s biggest right-wing parties, including Vox, to repeal the gender-violence law. Vox has tapped into this macho reaction and doubled down on its anti-feminism.

Such platforms are more often seen in eastern Europe than in western Europe, Ruth Wodak, a linguistics professor at Lancaster University and the University of Vienna who focuses on right-wing populist rhetoric, told me. France’s Marine Le Pen, shy of calling herself a feminist, has come out to defend “women’s rights” (though she did so largely to prop up her anti-immigration policies). The Dutch and Scandinavian far right has “more progressive gender politics,” Wodak says. These are mainly manifested in an apparent embrace of LGBTQ rights, though this too is often at the expense of immigrants: In 2015, Sweden’s far-right party staged an unofficial gay-rights parade in a predominantly Muslim neighborhood. In Italy, Matteo Salvini, the country’s interior minister and leader of the League party, has said that abortion and “equal rights between men and women” were not up for debate.

In that sense, Vox looks more like an eastern European party. Its policies look strikingly similar to those of Hungarian Prime Minister Viktor Orbán, who recently announced measures to help mothers by rewarding those who have multiple children with tax cuts and financial subsidies. Wodak attributes the parallels to Spain’s more recent departure from fascism than its Western European neighbors.

Polls peg support for Vox at about 10 percent nationwide. At that level, it could play a kingmaker role and, some worry, be invited into government. According to available polling data, the average Vox voter is a man age 35 to 44, though Vox youth groups are picking up younger supporters too.

In approximately 20 interviews with young Vox affiliates and sympathizers, almost every person I spoke to started out talking about Spanish unity when I asked what had brought them to the party. But the second I asked about Vox’s gender policies, I was told, without fail (by both men and women), that they agreed 100 percent with the party line. At a recent party rally in Barcelona, I spoke to Enrique Lopez, an 18-year-old originally from Málaga, on the southern coast. Lopez, who wore a Spanish flag draped around his shoulders, superhero-cape style, said the party’s gender policies were as important to him as its unionist stance. “Women don’t need their own special law,” he told me. “Violence doesn’t have a gender.”

Hydroxychloroquine: How WHO and The Lancet Let a Little-Known Company Twist Them Around Its Finger