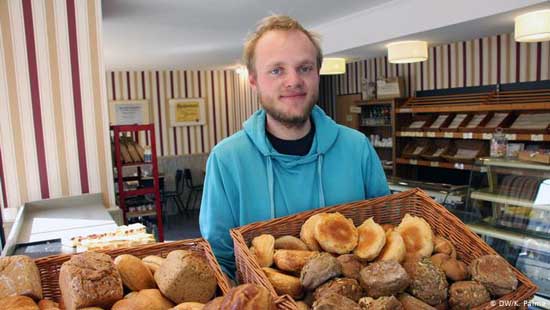 One-third of all food worldwide ends up in the garbage, with industrialized countries contributing the most. A new foodsharing platform wants to help tackle the impact this has on our climate.

It’s raining cats and dogs as Jonas Korn rescues baked goods from being thrown away. It is midday on a Saturday and the Falland bakery in the south of Leipzig is getting ready to close. Five baking trays with cakes, donuts and fruit pastries are lined up on a long counter in the entrance area. Behind it, ten boxes are stacked with rolls, croissants and loves of bread.

“If you were to put all this in a trash can, it would be full. It would fill a 120 liter dumpster,” muses the 26-year-old student.

In order to make sure the leftover products are distributed instead of discarded, Jonas has brought reinforcements: three fellow campaigners from the organization Foodsharing. The online platform links more than 50,000 “food savers” with businesses that want to give away food for free instead of throwing it away.

“According to 2011 estimates, one-third of all food produced globally ends up in the garbage,” says Rosa Rolle, head of the Food Loss and Food Waste Project at the Food and Agriculture Organization of the United Nations (FAO).

In total, that is 1.3 billion tons of food per year that goes uneaten. The FAO estimates that collectively this food waste has a CO2 footprint of 3.6 gigatons of carbon dioxide. These figures don’t include the CO2 emissions produced when forests are cleared for animal farming or to create soybean or palm oil plantations. In other words, if food production were a country, it would be the third largest CO2 emitter in the world after the US and China.

The ‘haves’ throw away a lot of food

The majority of food waste is produced by the high-income industrialized countries. According to FAO estimates, Europeans on average throw away 95 kilograms (209 lbs) of food annually per person. In the low-income African countries south of the Sahara, it is only 6 kilograms.

Some food groups are more resource intensive than others. Meat is by far the worst for the climate, partly because cattle and other ruminants generate large amounts of methane, a greenhouse gas that is about 25 times more harmful to the climate than CO2. In the case of cows that amounts to several hundred liters of gas every day. As a result, according to the environmental organization Greenpeace, roughly 13 kilograms of CO2 is released per kilogram of beef, compared to only 0.75 kilograms of CO2 for a typical loaf of brown bread.

Meat that is thrown away is therefore far more problematic for the environment than most other plant-based foods, all the more so because 20 percent of the world’s meat products end up in the bin. That’s equivalent to 75 million cows a year, according to the FAO.

Tackling the mountains of food waste

“Despite some progress and good initiatives for redistribution, too much food still ends up in landfills, releasing even more climate-damaging gases into the atmosphere,” says Rolle. Regardless of whether it’s bread or meat, it continues to contribute to climate change, as organic waste rots in landfills and releases methane gas.

“In the EU, for example, this is still the case in the small island nation of Malta,” says Stefanie Siebert from the European Compost Network (ECN), an association of European companies from the bio-waste industry. Although landfill methane gas can be captured and used to generate electricity, that can’t happen until the landfill is closed. “As long as waste is still being transported to the landfill, the climate-damaging gases escape unhindered into the atmosphere,” she says. So what are the alternatives?

Turning waste into a source for clean electricity?

“First and foremost, we have to try to avoid food waste,” said Siebert. But ultimately an eco-friendly recycling of food waste needs to happen not only among individuals but at an industrial level. This can happen, for example, in biogas plants. Here, the gas produced by decomposing food waste can be used much more effectively than at the landfill. The facilities continuously generate electricity and heat, which, depending on the system, can also be fed into the grid. What remains is the fermentation product. “This remaining product from the biogas plants is fluid,” says Siebert. Further composted with wood materials, it can be turned into high quality compost. But so far, only 17 percent of organic waste within the EU is composted or fermented.

One of the places where this happens is Leipzig, but for Jonas Korn and his three companions that is no reason to waste food: “Then you may as well throw the whole supermarket in the biogas plant,” jokes Korn. The four of them carry bulging bags out of the small bakery. “I eat a lot myself and give away a lot to friends and acquaintances,” says Carolina, a young woman who has been energetically packing the bags. But Korn emphasizes that welfare institutions are given priority.

Korn checks again to see if all bags are well secured in the bicycle trailer. The rain has not let up. “Hopefully it will not get wet,” he says and cycles away.