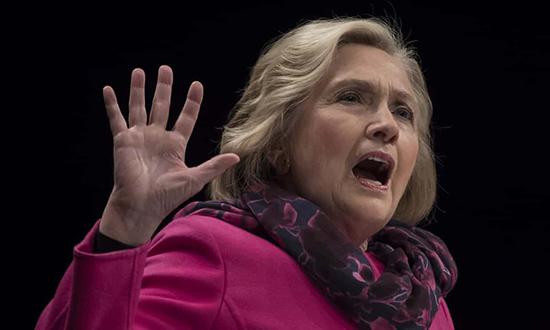 Hillary Clinton has blamed Justice Department rules for the Mueller report’s failure to indict President Donald Trump, declaring the “roadmap” to an obstruction charge is there in plain sight, should Congress choose to pursue it.

“I think there is enough there that any other person who had engaged in those acts would certainly have been indicted,” Clinton told an audience at the Time 100 summit, insisting the Mueller report, despite its failure to substantiate the criminal accusations leveled against the president, was merely “the end of the beginning” of what could be a beautiful impeachment – if Congress plays its cards right.

“The whole matter of obstruction was very directly sent to the Congress,” she said, blaming a “rule in the Justice Department that you can’t indict a sitting president” for the investigation’s failure to deliver Donald Trump’s head on a plate.

Having worked that out, Clinton blame-checked Russia, reminding the audience that “It’s a story that needs to be told, and retold, over and over again, because we were the subject of a foreign adversary’s attack.”

“There’s still so much more that we should know and that we should act upon and obviously that’s what the Congress is trying to figure out – what to do right now,” Clinton said, adding that “every American who cares about holding our adversaries accountable” should read the unredacted report “to prevent what happened from ever happening again.”

While Clinton seemed excited to add “Justice Department rule” to the list of reasons why she isn’t sitting in the White House, there is actually no law forbidding the indictment of a sitting president, though it hasn’t been done before –fortunately for her husband’s presidency.

Jaws dropped on Twitter at the perennial candidate’s chutzpah.

Though, of course, she had her defenders, traditionally accusing the haters of being bots.

US to Rejoin JCPOA for Further Talks If Iran Resumes Compliance With Nuclear Deal, Biden Says