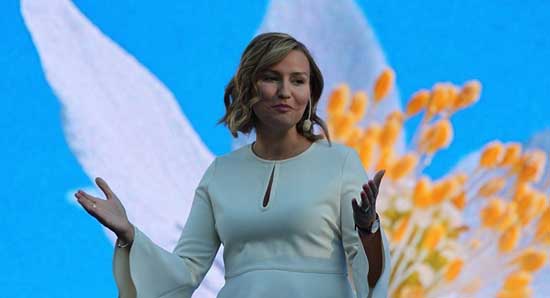 Despite the fact that the percentage of Christians in Scandinavia’s largest country continues to shrink, four out of ten Swedes say they want a community based on Christian foundations, double the proportion reported only a few years ago, a new study from Linnaeus University has shown.

While admitting that Sweden has changed and the disappearance of traditional values is especially obvious in the suburbs, Swedish Christian Democrat leader Ebba Busch Thor has rejected the idea of cultural Islamisation in her country.

“And even though Sweden has problems with radical Islamism, no cultural Islamisation is going on, despite what the national populists have warned. I believe it is rather a lack of culture. With children who cannot cope with school, adults who do not dare to go out and businesses that cannot be opened,” Ebba Busch Thor wrote in her recent opinion piece published by Expressen daily.

At the same time, she stressed that the percentage of Swedes who would like a society built on Christian values has doubled in recent years, according to a study from Linnaeus University, despite the dwindling numbers of the Church of Sweden. Busch Thor linked this Christian revival to the migrant crisis.

“When immigration grew and exclusion with it, it became apparent that integration cannot occur without something permanent to be integrated into,” Busch Thor wrote. She also denounced the current integration politics, claiming that it hasn’t resulted in a “creative creole” liberals have dreamt of.

She argued that while Christian heritage is often seen as something imposed and old-fashioned, it has provided historical opportunities.

“All the rights and freedoms we cherish and safeguard in Sweden have their origins in Christianity. Not just freedom of expression, freedom of association, religious freedom, and the rule of law and democracy. Also individualism, equality and sexual liberation,” Ebba Busch Thor wrote.

​She pointed out that countries based on Christian foundations offer the best opportunities for self-realisation, Likewise, Christian, especially Protestant countries, have achieved the strongest economic development, she noted.

“Where do you have the greatest opportunities for personal fulfilment? Whether you are a lesbian atheist, a Muslim animal rights activist or a feminist people’s party member, the answer is the same: in a country based on a Christian foundation,” Busch Thor concluded, stressing that Christian values are a guarantor of a liberal lifestyle.

Recent surveys suggest a spike in Swedes’ support for the Christian Democrats, with Busch Thor’s party polling its record number above 12 percent, almost doubling their numbers since 2014.

Christianity was the dominant religion of virtually all of the Swedish population from the Middle Ages to the mid-20th century, but has seen a rapid decline in the past decades. Since 1951, freedom of religion has been enshrined in Swedish law. As of 2017, only 59.3 percent of the Swedish population were registered with the official Church of Sweden, with the percentage shrinking annually by over a percentage point.

By contrast, the percentage of Muslims has been rising steadily. While there were only 500 Muslims in Sweden in 1953, their share has since exceeded 8 percent of Sweden’s population of 10 million, according to a 2017 Pew Research report. Islam has also made a mark on Swedish society, with topics ranging from acceptance of Islamic garments to honour-related oppression permeating the media.

The figures have been boosted by the migrant crisis. In the last several years, Sweden has taken in over 200,000 asylum seekers, mostly from Islamic countries. Syrians, Iraqis, Iranians, Somalis and Afghans are among the largest population groups.