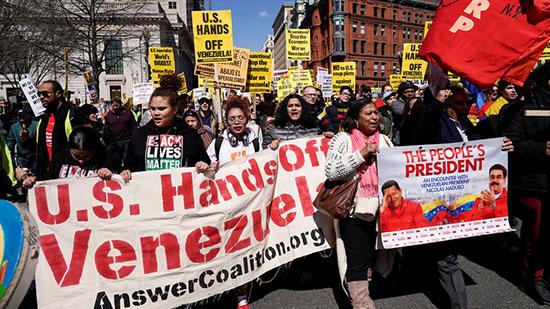 Activists occupying the Venezuelan embassy in Washington in solidarity with President Nicolas Maduro’s government are bracing for confrontation as authorities prepare to try to seize the building on behalf of the opposition.

The Embassy Civilian Protection Collective has promised not to leave the embassy until the US comes to an agreement with the Venezuelan government to end the regime-change operation it is attempting on its soil. As of Wednesday evening, the deadline Venezuelan diplomats were given when they were ordered to leave the US, Secret Service agents were encircling the diplomatic building, which is considered Venezuelan property under international law. The group believes they will attempt to seize it by force on Thursday.

After watching forces loyal to opposition leader Juan Guaido take over Venezuelan diplomatic buildings in Washington and New York last month, Popular Resistance co-founders Kevin Zeese and Margaret Flowers and Code Pink founder Medea Benjamin decided to hold a vigil to prevent the Venezuelan embassy from meeting the same fate. After securing permission from the Venezuelan Foreign Ministry, they moved in, and have since been joined by journalists Max Blumenthal and Alex Rubinstein, whistleblower John Kiriakou, and a host of other activists.

The ad-hoc group has camped out in the Venezuelan embassy for the last two weeks, working with the pro-Maduro diplomats as they prepared to leave in order to ensure the building remains out of the hands of Guaido. The occupiers have held classes, teach-ins, film screenings, and other events to discuss US policy, human rights, and other relevant issues.

Guaido declared himself President in January despite four fifths of the country not knowing who he was at the time. The US recognized his government and was quickly followed by a cohort of allies. Billions of dollars in Venezuelan assets have been seized and turned over to Guaido, who has called for his supporters to take over the presidential palace Miraflores on May 1. The Constituent Assembly, meanwhile, has stripped him of his parliamentary immunity, while the police have thoughtfully stepped in to defend him from the angry mobs that have tried to swarm his car when he attempted to mingle with the masses he claims support him.