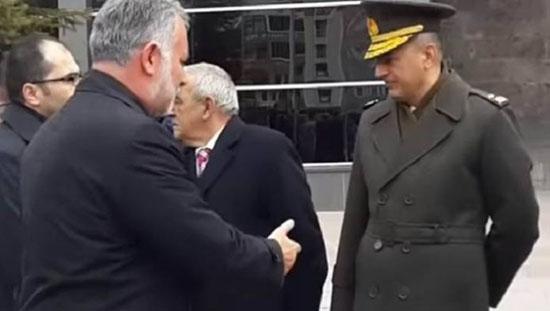 A brigadier general refused to shake hands with Ayhan Bilgen and Şevin Alaca, who were elected co-mayors of the eastern Turkish city of Van in the March 31 local elections, during a ceremony on Tuesday, Turkish media reports said.

The moment when Brig. Gen. Özgür Nuhut refused Bilgen and Alaca’s handshakes was captured by the cameras of a local TV station when officials from Kars convened in front of the Kars Governor’s Office to mark April 23, National Sovereignty and Children’s Day.

The politicians are from the ranks of the Kurdish Peoples’ Democratic Party (HDP), seen by the Turkish military and the government as the political extension of the terrorist Kurdistan Workers’ Party (PKK), which has been waging a bloody war in Turkey’s Southeast since 1984.

In the video footage Nuhut is seen shaking hands with other city officials while taking his hand back when Bilgen and Alaca extend theirs.

The general’s move attracted harsh criticism from the HDP, which described it as an act of disrespect of the nation’s will.

“This situation is the result of a military tutelage created by the ruling party,” the HDP said in a statement, accusing the ruling Justice and Development Party (AKP) of fomenting hatred of the HDP.

Bilgen also reacted to the general’s refusal to shake hands, tweeting: “If this attitude is not against me personally but against the will of the people of Kars, then they will give the necessary answer. If the lack of tolerance is for democracy, then the ruling party should explain it.”

The AKP and its leader, President Recep Tayyip Erdoğan, constantly accused HDP politicians of being terrorists during the AKP’s campaign for local elections, which many say reached the level of demonizing the party.