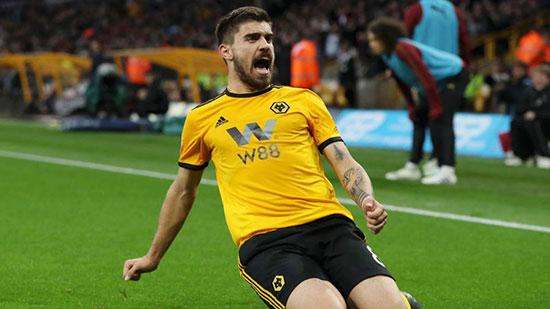 Sporting Life · Columnist
Arsenal’s away form remains their Achilles heel in their challenge for a top-four finish in the Premier League after they were put to the sword by Wolves.

A draw would have been good enough for the Gunners to go above London rivals Chelsea and take the last Champions League qualification place, but first-half goals from Ruben Neves, Matt Doherty and Diogo Jota set Wolves on their way to a 3-1 win.

Sokratis Papastathopoulos headed a reply late on but Unai Emery’s side have won just six times on the road this season and still face tricky trips to Leicester and Burnley.

Arsenal became the latest of the division’s top-six clubs to taste defeat at Molineux, where Chelsea, Liverpool and Manchester United have also been beaten this season.

The victory enhanced Wolves’ own chances of securing European football for next season as they moved back into seventh place – which will be enough for a Europa League spot should Manchester City win next month’s FA Cup final against Watford.

Arsenal made a confident start to the match, enjoying plenty of possession. However, Wolves were looking to press their opponents at every opportunity.

Despite seeing much of the ball early on, the Gunners created very little apart from a couple of dangerous crosses into the penalty area that Rui Patricio was alert enough to intercept.

Wolves eventually found their feet midway through the first half and Joao Moutinho curled an effort just wide from the edge of the box before Raul Jimenez looped a header on to the roof of the net from a Conor Coady long throw-in.

The hosts were beginning to cause Arsenal problems on the break through Jota and Jonny Otto, with the latter’s burst forward bringing the opening goal after 28 minutes when Nacho Monreal tripped him on the edge of the area. The defender received a yellow card for the foul.

The resulting free-kick was dispatched with aplomb by Neves from a deliberate strike with his laces that dipped over the defensive wall and into the bottom corner of the net beyond the dive of Bernd Leno.

Another swift attack from the hosts saw Jonny set up Jimenez but his shot flew over the crossbar.

The Spanish wing-back was involved again when Wolves doubled their lead in the 37th minute, crossing the ball after taking a short corner for Doherty to beat Leno to the punch and glance his header into the unguarded goal.

Arsenal were stunned and resorted to long-range efforts from Granit Xhaka and Henrikh Mkhitaryan in a desperate attempt to get back into the match.

However, Wolves were rampant and, after Arsenal lost possession inside their own half in first-half stoppage time, Jota skipped past Sokratis and into the penalty area where his low shot was too hard for Leno and squirmed beneath the goalkeeper and into the net.

Things should have got even better for Wolves at the start of the second half following another counter attack but Jota, unmarked at the far post about 12 yards out, was unable to control Jimenez’s cross.

Arsenal looked short of ideas but managed a consolation goal with 10 minutes remaining when Sokratis headed in Xhaka’s corner at the far post.