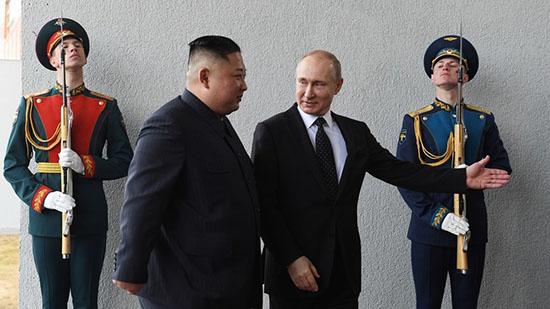 Leaders of Russia and North Korea sat down for a historic summit in Vladivostok, expressing hope it will revive the peace process in the Korean Peninsula and talks on normalizing relations with the US.

The summit on Russky Island, just off Vladivostok, started a little late because President Vladimir Putin’s flight was delayed. North Korean leader Kim Jong-un had made the trip by train, arriving on Wednesday.

In brief public remarks before the talks, the two leaders expressed hope the summit will help move forward the reconciliation process in the Korean Peninsula. Putin welcomed Kim’s contributions to “normalizing relations” with the US and opening a dialogue with South Korea.

Kim said he hoped the Vladivostok summit would be a “milestone” in the talks about denuclearizing the Korean Peninsula, but also build upon “traditionally friendly ties” between Russia and North Korea.

The North Korean leader also made a point of thanking Putin for flying all the way to Vladivostok for the meeting. The Far East Russian city is only 129 kilometers from the border with North Korea.

The historic summit takes place less than two months after Kim’s second summit with US President Donald Trump in Hanoi fell apart without a breakthrough on denuclearization. The US rejected North Korea’s request for partial sanctions relief in return for moves to dismantle nuclear and missile programs; Washington insists on full disarmament before any sanctions are removed.

Denuclearization of the Korean Peninsula is the main subject of the Kim-Putin summit, but there will also be talks about bilateral relations, trade, and humanitarian aid. The first one-on-one meeting is scheduled to last about an hour, followed by further consultations involving other government officials.

Following the summit, Putin is scheduled to visit China.