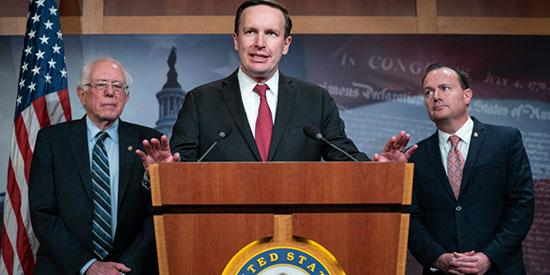 US President Donald J. Trump has said his administration looks forward to negotiating a “large-scale trade deal” with the UK, but Democratic Senator Chris Murphy from Connecticut warned that such an agreement would never pass through the House if it violated the Good Friday Agreement that ended the sectarian conflict in Northern Ireland that killed thousands.

Murphy believes the US Congress would not be willing to pass a free trade deal with the UK if a hard border between EU member Ireland and Northern Ireland, who will remain within the UK.

“I think the EU is just as committed as Britain is to make sure there is a free flow of people and goods (…) There still is this existential conflict between what the referendum called for and what is necessary to maintain the Belfast Good Friday Agreement,” Murphy said, adding, “Trump doesn’t ultimately control whether or not the Congress passes a trade agreement that is negotiated with Britain. There are enough friends of Northern Ireland and friends of Ireland in the United States Congress that we are going to demand that the peace process be protected.”

The European Union has made clear Brussels will stand by Dublin and will not accept any withdrawal agreement that fails to guarantee that Ireland’s 500km border with Northern Ireland remains open.

“I think there is very little chance that there will be a US-Britain free trade agreement, but there is no chance for that agreement if there is any potential for a border to go back up between Ireland and Northern Ireland,” said Murphy.