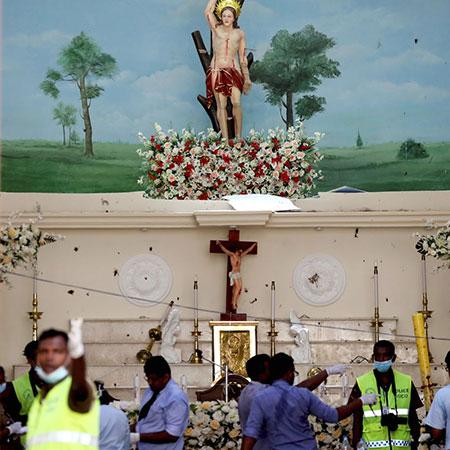 Sri Lanka has admitted a “major intelligence lapse” before the Easter Sunday bomb attacks which killed 359 people and wounded more than 500.

An Indian intelligence warning from the beginning of the month about planned attacks was not properly shared by the authorities, parliament heard.

President Maithripala Sirisena has moved to sack the defence secretary and inspector general of police.

Eight of the nine attackers have been identified as Sri Lankan citizens.

The government is investigating whether the Islamic State (IS) group was involved in the attacks which targeted churches and high-end hotels.

It has emerged that one of the attackers once studied in the UK and Australia before returning to Sri Lanka.

How did the authorities get it wrong?

“We have to take responsibility because unfortunately if the sharing of the intelligence information had been given to the right people, I think that at least this could have been avoided or even minimised,” said Deputy Defence Minister Ruwan Wijewardene.

“Information was there but the top brass security officials did not take appropriate actions.”

He said the Indian tip-off had been received on 4 April but, Reuters news agency says, both the president and Prime Minister Ranil Wickremesinghe reportedly did not receive it.

What do we know about the attackers?

The whereabouts of Islamist preacher Zahran Hashim, who is suspected of being the bombers’ ringleader, remain unclear.

He appears in an IS video but police do not know whether he detonated one of the suicide bombs or is still at large.

His sister, Mohammad Hashim Madaniya, told BBC News: “I came to know about his actions only through the media. Even for a moment, I never thought that he would do such a thing.

“I strongly deplore what he has done. Even if he is my brother, I cannot accept this. I’m not worried about him anymore.”

Most of the attackers were “well educated” and came from “middle or upper middle class” families, according to Mr Wijewardene.

A senior Whitehall official told the BBC that he visited south-east England in 2006-7 to study but did not complete a full university degree.

From privilege to terror

The announcement that most of the attackers were “well educated” and “middle class” is not as surprising as it sounds.

Although poverty and lack of opportunities have steered many down a path to terrorism, there are also numerous examples of individuals abandoning a relatively comfortable lifestyle for a violent cause.

Ziad Jarrah, one of the 9/11 attackers who hijacked United Airlines flight 93, came from a privileged Lebanese family. More recently, there have been cases of British jihadists who have worked for the NHS, including doctors.

The late IS executioner Mohammed Emwazi, aka “Jihadi John”, attended the University of Westminster in London. And the original co-founder of al-Qaeda, Osama Bin Laden, chose to leave behind a luxurious life in Jeddah to go and fight the Soviets in Afghanistan during the 1980s.

Sri Lanka’s government has blamed the blasts on local Islamist group National Thowheed Jamath (NTJ) but Mr Wickremesinghe said the attacks “could not have been done just locally”.

NTJ has no history of large-scale attacks but came to prominence last year when it was blamed for damaging Buddhist statues. The group has not said it carried out Sunday’s bombings.

IS said online that it had “targeted nationals of the crusader alliance [anti-IS US-led coalition] and Christians in Sri Lanka”.

It provided no evidence for the claim other than images on social media of the suspected attackers.

What action are security forces taking?

Police have now detained around 60 suspects in connection with the attack. A state of emergency remains in effect to prevent further attacks.

An attack on a fourth hotel on Sunday was foiled, Mr Wickremesinghe said. He also warned that further militants and explosives could still be “out there” following the attack.

One of the targeted hotels, the Kingsbury, has now reopened.

Cautioning about “ongoing terrorist plots in the country”, US envoy to Sri Lanka Alaina Teplitz told reporters that terrorists could “strike without warning”.

Who were the victims?

The first mass funeral was held on Tuesday, as Sri Lanka marked an official day of mourning for the victims.

Most of those who died were Sri Lankan nationals, including scores of Christians attending Easter Sunday church services.

Some 38 foreign nationals were among the dead, with another 14 unaccounted for. The death toll includes at least eight British citizens and at least 11 Indian nationals.

The mass funeral for about 30 victims took place at St Sebastian’s church in Negombo, north of Colombo, which was one of the places targeted in Sunday’s blasts.