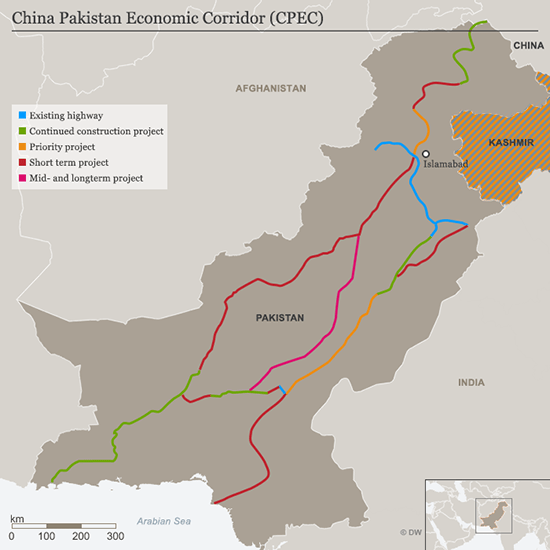 Pakistan’s Prime Minister Imran Khan is participating in the second Belt and Road Forum in Beijing amid reports that the multi-billion dollar China-Pakistan Economic Corridor project is not really moving forward.

China on Tuesday reiterated its faith in the multi-billion dollar China-Pakistan Economic Corridor(CPEC), a flagship project in its global Belt and Road Initiative (BRI). Beijing also lauded Pakistani PM Imran Khan’s decision to participate in the three-day Belt and Road Forum for International Cooperation, which kicked off on Thursday, April 25.

The Pakistani government, too, has emphasized the need for better economic ties with China to boost its economy, which constantly needs foreign loans to function.

In 2015, China announced CPEC, which is part of its intercontinental Belt and Road Initiative (BRI), with an aim to expand its influence in Pakistan and across Central and South Asia, as well as countering US influence in the region. CPEC also includes plans to create road, rail and oil pipeline links to improve connectivity between China and the Middle East. As Pakistan is grappling with an acute economic crisis, experts say that CPEC has the potential to stimulate much-needed economic activity in the country.

But experts say the implementation of CPEC projects have slowed since Khan came to power in August, last year. Abdul Razak Dawood, Pakistan’s minister for commerce, industry and investment, suggested in September, 2018, that all CPEC projects could be suspended until a review is completed.

“I think we should put everything on hold for a year, so we can get our act together,” Dawood told the Financial Times in an interview. “Perhaps we can stretch CPEC out over another five years or so.”

Dawood also criticized the previous government headed by Nawaz Sharif, who is now incarcerated on corruption charges, for granting China “too favorable” terms on many projects.

“Chinese companies received tax breaks, many breaks and have an undue advantage in Pakistan; this is one of the things we’re looking at because it’s not fair that Pakistani companies should be disadvantaged,” Dawood said.

Although, Dawood later “clarified” to a local TV channel that his remarks about CPEC had been taken out of context, some experts say that in spite of diplomatic exchanges, all is not well on CPEC.

In an interview with DW, Nadeem Akhtar, a Karachi-based political commentator and columnist, suggests some of the reasons for this friction and explains why CPEC has not reached its potential in Pakistan.

DW: What is the current situation of the China-Pakistan Economic Corridor (CPEC)?

Nadeem Akhtar: Some CPEC projects have been put on a backburner, and some are moving very slowly. In my opinion, the main reason behind this is the incumbent government’s lack of interest in the project.

To understand this, we have to recall Imran Khan’s opposition to CPEC before coming to power. In 2014, his protest against then PM Nawaz Sharif, and the blockade of Islamabad, resulted in the cancellation of Chinese President Xi Jinping’s official visit to Pakistan. Sharif even requested Khan to postpone his protest so that Xi could visit the country, but Khan’s Pakistan Tehreek-e-Insaf (PTI) party rejected the offer. Xi was supposed to inaugurate CPEC in 2014; the project eventually kicked off a year later.

When Khan came to power, his government made its stance on CPEC clear in September 2018, when the minister of commerce, Razaq Dawood, told a foreign media outlet that the economic corridor should be suspended for at least one year.

Why is PM Khan’s government not enthusiastic about CPEC?

The PTI has maintained that former PM Sharif and his close aides were colluding with Chinese companies for monetary gains. After coming to power, Khan could not have changed this narrative so easily. Also, the military establishment that helped Khan’s rise to power was also not very pleased with CPEC. Actually, they were of the view that if Sharif was allowed to carry forward CPEC, it would make him more powerful as prime minister. They thought that Sharif would gain more popularity and would not be dependent on the military anymore.

The opposition to CPEC also comes from Gulf States, which fear that the Gwadar port (part of CPEC) in Pakistan’s western Baluchistan province would increase Beijing’s influence in the region, where they already have major ports.

Is the Pakistani military really wary of CPEC?  They have never publicly opposed the project…

There are many reasons for wariness. The military generals give priority to defense ties with Beijing, but they also think that huge economic projects like CPEC would strengthen financial ties with China, and political forces would lap up the credit for that.

Also, in the long run, CPEC would force Pakistan to improve ties with arch-rival India and other neighboring countries. All this would be in conflict with the military’s security doctrine that gives Pakistani generals an upper hand on the affairs of the country.

How is China reacting to a reported lack of progress on CPEC?

China is certainly unhappy with the situation. CPEC is only a part of its larger Belt and Road Initiative. Beijing faces opposition from the US and some countries on the South China Sea. The South Asian trade routes offer more options. I am not saying that Beijing would give up on the South China Sea, but obviously it needs other routes, and they are all part of the BRI.

Why did former PM Sharif want closer ties with China and India?

As a politician and a businessman, Sharif knew that he needed to deliver on his economic promise. He knew that his popularity would decline if he failed to improve the country’s economy. But it is also a fact that any civilian government in Pakistan has very little room to maneuver. It is the army that calls the shots in the country. Sharif also didn’t want to clash with the military. Instead, he though that by focusing on development and the economy, he could eventually curtail the military’s strength.

Sharif’s government, thus, tried to shift the focus from defense to trade. It preferred economic ties with China over financial loans from Saudi Arabia. He knew that China would be interested in investing in Pakistan. So in 2015, the Chinese president visited Islamabad and sealed CPEC.

At the time of Sharif’s ouster by the Supreme Court, which many people believe was orchestrated by the military, at least 29-billion dollars had been spent on various CPEC projects. Pakistan’s economy had started performing better and the country’s growth had reached the 5.8% mark. All of this nosedived after Sharif left.

The previous government also wanted better ties with India. The business-minded premier was of the view that the geographical proximity to India would be beneficial for Pakistan’s economy. India is currently the sixth largest economy in the world. The Indian market would also benefit from Pakistani collaboration. India and Pakistan still trade with each other, but more so through Dubai. Their bilateral trade through the United Arab Emirates amounts to at least $5 billion (€4.46 billion).This number can increase manifold if the ties between India and Pakistan see an improvement and border tensions are eased. Former PM Sharif and his business associates wanted to utilize this potential.

Can China bring India and Pakistan closer together?

It can. China was closer to Pakistan than India during the Cold War. It has now improved ties with New Delhi. According to the latest figures, bilateral trade between China and India stands at $90 billion (€80.31 billion). It can definitely be increased further.

I think that, unlike the US, which is more interested in strategic and defense ties with South Asian countries, China wants to boost economic relations in its neighborhood, primarily for its own interests. China would ultimately want to extend CPEC to India to tap in its huge market. But as I said earlier, the Pakistani military does not want to give up its power and would continue to oppose better economic ties with New Delhi.

Nadeem Akhter is a Karachi-based columnist, political commentator and author of several books.

The interview was conducted by Shamil Shams.