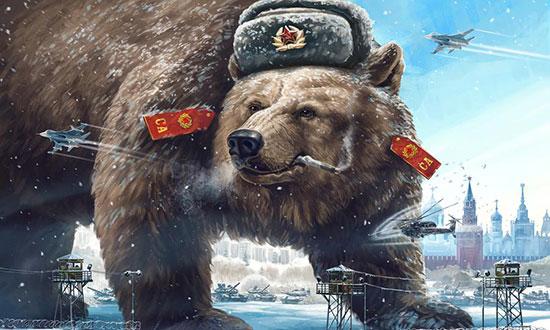 In a high-profile spat, Turkish President Tayyip Erdogan has acknowledged he is buying S-400 missile defense systems, a deal that has put Ankara on a collision course with Nato and Washington and complicated the country’s deal to buy F35 stealth jets from the United States.

This Ankara-Washington stand-off over the sale of Russian missiles and Erdogan’s obvious commitment to go ahead with the deal make clear how Moscow’s aggressive arms trade is offering the Kremlin new opportunities to strengthen its position, influence and foothold the world over.

Turkey is only one of the markets for Moscow’s arms traders. According to the latest annual report by The Stockholm International Peace Research Institute (SIPRI) for 2018, Russia has surpassed Britain as the number two arms producer and trader in the world, behind perennial number one, the US.

Combined sales of Russia’s arms and military services rose 8.5% from a year earlier, reaching an unprecedented US$37.7 billion. Also, according to SIRPI, the largest arms-producing company in Russia, state-owned Almaz-Antey, for the first time entered the top 10 in the global arms sales ranking.

Russia’s leading export is energy, its second is weaponry. The USSR, as the “arsenal of communism,” was long a maker of classic weapons, from the T34 – the outstanding tank of World War II – and the Katyusha multiple rocket launcher to the Kalashnikov assault rifle and MIG and Sukhoi warplanes.

Following the break-up of the USSR, Russia’s military budget shrank six-fold. Potentially catastrophically, arms makers lost many of their top customers – the Eastern European member states of the Warsaw Pact. That forced producers to refocus on global sales. Even so, old partnerships in other parts of the world endured.

Russia’s manufacturers of effective and reliable arms have been given a powerful shot in the arm by President Vladimir Putin. The macho national leader’s injection blends industrial policy, R&D policy and foreign policy with personal testosterone.

With Putin an arms fetishist himself – he has been filmed watching tanks going through their paces at proving grounds, firing pistols, visiting the Kalashnikov factory, interacting with fully geared-up special forces, even cruising in a jet fighter in full paraphernalia – Russian arms manufacturers benefit from a highly prominent global marketer like no other.

The top priority is China. While Chinese troops used Russian arms as early as the Korean War in the 1950s, the roots of current Moscow-Beijing cooperation in the sector date back to the turbulent early 1990s. China was Russia’s largest client between 1999 and 2006, accounting annually for 34% to 60% of Russia’s weapon exports, according to Russia’s Far East Institute.

In 2015, after years of negotiations, Beijing-Moscow cooperation ramped up a level when Russia finally agreed to sell China some of its most advanced arms: 24 Sukhoi Su 35 combat aircraft and four S-400 SAM systems for approximately $7 billion within the next five years.

Then there’s Asia’s other rising demographic superpower, India, which acquires 62% of all its arms from Russia. Russia is providing a range of equipment, from tanks to fighter aircraft to frigates. India has now overtaken China as the largest buyer of Russian weapons in the world, having purchased more than $4 billion worth of arms in 2017, according to Russia’s Oriental Studies Institute.

But the emerging Asian market for Russian hardware is Southeast Asia, where, from 2006 to 2015, military spending rose by an average of 57%, according to Aseantoday website.

As soon as Air Marshall Yuyu Sutisna was sworn in as Indonesia’s new Air Force Chief of Staff last year, he announced the purchase of 11 new SU-35s. And that’s just the beginning. The Russians are anticipating future great deals.

“All that is a response to national security threats of countries in the region,” explained Petr Brigin, a Vietnam expert at Vostochnaya Politika, a Moscow think tank. “Vietnam, for example, is spending heavily on naval weaponry – in response to China’s moves in the South China Sea.

“In Thailand, dealing with an insurgency in the south of the country, there’s a strong demand for land-based arms – so  the Royal Thai Armed Forces placed an order for new AK rifles.”

Between 2000 and 2016, Vietnam imported more than 80% of its arms from Russia, rejuvenating an old partnership – the country deployed Warsaw Pact weapons in its struggle against the United States.

Myanmar and Laos bought between 60% and 80% of their weapons from Russia. Why buy Russian? Because not only are these weapons technologically advanced, they are cheaper and don’t require the political sign off that arms from Moscow’s main rival do. Human rights criteria must be met before the US Congress approves arms sales, but Russian weapons come with no such baggage.

In 2016, the Philippines placed an order for 26,000 automatic rifles from the US. Those rifles never arrived, as Congress refused to approve the sale over suspicions that President Rodrigo Duterte might use the weapons against his own people in his war on drugs.

As a result, Moscow stepped in and supplied the Philippines with 5,000 AK-74M rifles, one million items of ammunition and 20 trucks.

“Selling weapons to Asian countries perfectly fits Putin’s foreign policy objectives,” said Alexei Sidorov, an independent Moscow-based analyst who specializes in Southeast Asia. “Putin is trading weaponry with rivals in the South China Sea,” he added, a reference to the fact that both Hanoi and Beijing were customers of Moscow’s armorers.

“This gives Moscow more leverage and political influence in the region.”

The ever-troubled, oil-rich Middle East is also high on Moscow’s agenda. It is a promising market – arms imports by Middle Eastern states rose 87% over the last four years, accounting for 35% of global arms imports, according to SIPRI.

Russia has been trying to make inroads into the prosperous Gulf states, a market dominated for decades by US arms producers. More than half of all US weapons sold go to the Middle East. To win over new customers from the Gulf, Russian companies in recent years have boosted their presence at the major airshows and defense exhibitions in the Middle East, like IDEX in Abu Dhabi and the Dubai Airshow.

In the region, Moscow deploys a special sales pitch. The Russian military has showcased the best it has to offer in its largely successful military intervention in Syria, a theater that has provided a proving ground for the weaponry.

Between 60 and 200 weapons have been tested in Syria in real combat. These include the supersonic strategic bomber the Tu-160, the Su-34 fighter-jet and the first Russian stealth fighter, the Su-57. Older generation T-90 tanks and Ka-52 attack helicopters have also proven their worth.

Egypt is traditionally a leading buyer of Russian arms. Moscow has actively sought to upgrade relations with Cairo, through subtle diplomacy and high-profile official visits – in 2015, Putin was the first major leader to meet with President Abdel-Fattah al-Sisi after he assumed office.

During Putin’s second visit in 2017, several landmark agreements were signed. Nowadays, Cairo is the leading Russian arms buyer in Africa, with annual weapons purchases estimated at more than $1.3 billion, according to data from Moscow University’s Asian-African Institute.

Moscow arms players also boast a strong foothold in Latin America. Many regional nations – particularly those aligned against the United States – are familiar with Soviet weapons from the Cold War days and are drawn by low price tags.

Cuba, Peru, Venezuela and Nicaragua are at the top of the list for Russian arms sales companies. According to SIPRI, between 2000 and 2017, the Russian share of arms sales to Latin America was about 20%, on par with the US share.

Russia also has a foothold in Brazil, where about 7% of arms sales are Russian. Since 2010, Russia has delivered Mi-35M combat helicopters and SA-24 portable surface-to-air missiles.

Sometimes Russian arms sales are found in unexpected places. Recently, following the ouster of Sudanese dictator Al-Bashir, it was reported in Moscow press that Russia had been selling arms to the regime for more than 20 years.