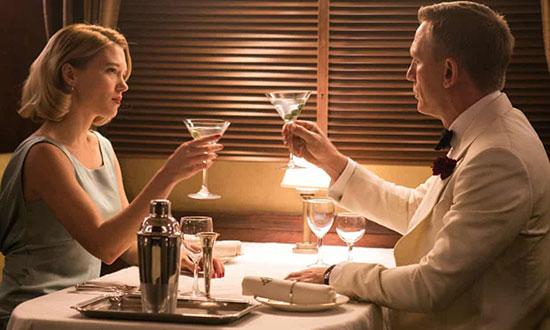 Daniel Craig’s swansong as 007 will see the return of Léa Seydoux, as well as previously-confirmed Rami Malek

Fresh details of plot and cast for the 25th James Bond film have been revealed at an official launch at Ian Fleming’s villa in Jamaica. With the sea in the background, a platter of pears and papaya in front, Bond producers Barbara Broccoli and Michael G Wilson as well as new director Cary Fukunaga told radio presenter Clara Amfo that the new film opens with Bond relaxing in “his spiritual home”.

“Bond is not on active service,” said Broccoli. “He’s enjoying himself in Jamaica.” The trio confirmed that MI6 regulars Ralph Fiennes (who took over from Judi Dench as M after 2012’s Skyfall), Naomie Harris (as Moneypenny), Jeffrey Wright (Felix Leiter), Rory Kinnear (as Bill Tanner) and Ben Whishaw (as Q) will return, alongside Léa Seydoux, who played psychologist Madeleine Swann in 2015’s Spectre.

Plot details were thin, but Bond 25 will involve the CIA and Leiter, who ask for help when tracking down a scientist. “The mission to rescue a kidnapped scientist turns out to be far more treacherous than expected, leading Bond on to the trail of a mysterious villain armed with dangerous new technology,” read a statement.

Broccoli also confirmed that Phoebe Waller-Bridge is working on the script. The Fleabag creator and star had been rumoured to be polishing the final draft; such a prominent namecheck on Thursday suggests her involvement is more central.

Previously announced was the addition to the cast of Rami Malek, who will play the film’s key villain, in his first major signing since he won an Oscar in February for his turn as Freddie Mercury in Bohemian Rhapsody. Malek appeared via video link, after appearing on US breakfast TV to discuss his new “thrilling” role.

The live-streamed event marked a change from the usual protocol, which has traditionally involved a press conference on set at Pinewood Studios. This may be due to the franchise’s UK studio transfer, with Universal having taken over from Sony since the release of the most recent Bond film, Spectre, in 2015.

Pre-production has been far from smooth. Bond 25 was originally scheduled for release this autumn, but is now due in cinemas next April. Several key personnel changes have rocked pre-productions, chief among them the abrupt departure of director Danny Boyle, who left after “creative differences” in August 2018, 14 weeks before shooting was scheduled to start.

The following month he was replaced by Fukunaga, who directed the first series of True Detective as well as acclaimed Idris Elba drama Beasts of No Nation. Fukunaga is said to have pushed for Bond to acquire a more eco-friendly identity, which appears to involve him driving an electric Aston Martin, worth £250,000. “I want to keep upping the ante,” said Fukunaga on Thursday. “So that whoever comes next has a harder job.”

Craig’s involvement in the project wasn’t always a given. Promoting Spectre, he told one interviewer he’d “rather slash [his] wrists” than reprise the role, adding that if he did it would only be for financial gain.

“I don’t know what the next step is. I’ve no idea,” he said. “Not because I’m trying to be cagey. Who the fuck knows? At the moment, we’ve done it. I’m not in discussion with anybody about anything. If I did another Bond movie, it would only be for the money.”

When asked about who should take over the role once he departed, he was yet more forthright, declaring: “Look, I don’t give a fuck.” Names rumoured to be under consideration included Tom Hiddleston, Idris Elba, Richard Madden and Aidan Turner.

The departure of Sam Mendes, who directed both Spectre and its 2012 predecessor, Skyfall, was thought to be behind some of his discontent, while Craig and Boyle reportedly did not see eye to eye on the direction of his final Bond appearance.

Last month, Boyle confirmed rumours his exit was down to disagreements over the screenplay, which he was co-scripting with long-term collaborator John Hodge, with whom he worked on films including Trainspotting and The Beach. “What [we] were doing, I thought, was really good,” he wrote.

Boyle said that the film would help the Bond franchise evolve in the #MeToo and #TimesUp era, and was thought to include a high-concept plot which could have seen the spy die or remain in prison for much of the film. “You write in real time,” he said. “You acknowledge the legacy of the world of Bond and you write in the world – but you also write in the modern world as well.”

The script has been through several pairs of hands since. After Boyle’s departure veteran Bond writers Neal Purvis and Robert Wade were rehired to “salvage” the project; and the director Paul Haggis is also reported to have worked on a draft. Eventually, Bourne Ultimatum writer Scott Z Burns was hired to rework the screenplay, while earlier this month it was reported that Waller-Bridge had also been brought on board.

The film’s rumoured working title – Shatterhand – met with ridicule when it was leaked in February. Taken from an alias used by Bond’s arch nemesis Ernst Stavro Blofeld in Ian Fleming’s 1964 Bond novel You Only Live Twice, Broccoli swiftly reassured fans it was not permanent.