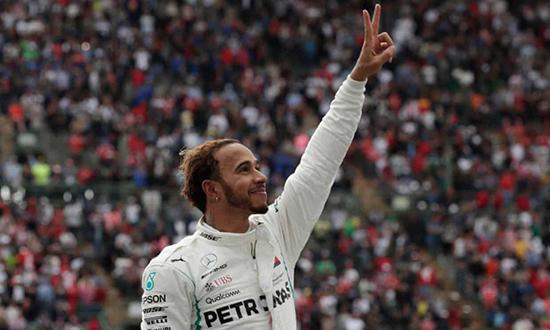 Lewis Hamilton said an enforced change in driving style paved the way for his victory in Sunday’s Chinese Grand Prix – the 1,000th race in Formula One history

Championship leader Lewis Hamilton is expecting his main rivals to give him a tough time on the demanding streets of Baku at this weekend’s Azerbaijan Grand Prix. The five-time world champion, who heads the embryonic 2019 title race by six points after three races, has struggled to master the Baku circuit in the past and won last year only after Mercedes’ team-mate Valtteri Bottas had a puncture when leading with three laps remaining.

That disappointment was a body blow for Bottas who did not fully recover and failed to claim a win as Hamilton romped to his fifth drivers’ crown. This time, Hamilton expects him, and Ferrari, to respond.

“I was fortunate to get the win here last year,” admitted Hamilton, who has developed a habit of turning unpromising races into valuable podium finishes or wins.

“I wasn’t quick enough really, right through the weekend so it will be interesting this time.

“I’m expecting Valtteri to be quick and I expect the Ferraris to be particularly quick. It will be interesting. I’m going with a mind-set that I’ve got to improve on my previous performances.”

Victory last year was Hamilton’s first at the tricky track made up of the season’s longest — and very fast — straight and tight corners, some with little run-off and walls.

A reinvigorated Bottas, winner of the season-opener in Melbourne, but beaten twice since then by Hamilton, has often relished such conditions.

“I’m disappointed that I didn’t win from pole in China and I know that was all about the start,” he said. “It’s all about details and learning from them.

“That’s life. It’s how it goes sometimes. I know I can turn this around so that’s my goal now. I would prefer to be leading.”

After three outings, Mercedes have proved they are in form with three straight one-two finishes, the first team to do so since 1992 when Williams, now struggling, were the dominant force.

Hamilton, however, has warned his team needs to be wary of Ferrari, wounded by their disappointing start after shining in pre-season testing.

Already adrift by 57 points in the constructors’ contest, they will be extra-keen to bounce back and end Mercedes’ run.

New boy Charles Leclerc, in particular, could be a major threat to Hamilton and Bottas as he is a slick street track specialist, won the Baku F2 race from pole in 2017, following his father’s death, and is keen to prove Ferrari wrong to use team orders in favour of four-time champion Sebastian Vettel.

“I love racing at Baku and scored my first F1 points there last year,” said the 21-year-old Monegasque. “I always go well there.”

Hamilton, who spoke in support of an under-fire Vettel earlier this season, was this week hailed by former Ferrari driver Gerhard Berger as the only man “on the same level” as his ex-McLaren team-mate Ayrton Senna.

Berger’s praise made clear that he saw nobody on the grid to equal Hamilton, an assessment sure to add vigour to Vettel’s need for success.

Ferrari fans may hope to see the raw power of their car’s engines give them a speed advantage on the long Baku straights, but team chief Mattia Binotto was reluctant to encourage the tifosi’s dream.

“Let’s wait — Mercedes were very strong in China and Baku is a very difficult circuit,” he said, hinting at the track’s reputation for creating chaos and the unexpected.